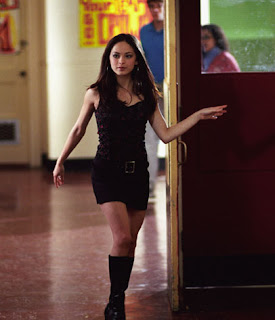 The next four SMALLVILLE episodes dip down in their mythic/symbolic qualities once more, as the series spins its wheels in a predictable soap opera mode.

"Kinetic" involves a gang of thieves who've found a way to use kryptonite paint in a manner analogous to the menace in "Shimmer:" however, this time the krypton-power gives them the ability to walk through walls and even harm people by partly merging with them (a la Marvel Comics' character the Vision).  The thugs-- all jocks who formerly attended Smallville High-- decide that they want a new member to beef up their ranks. To that end they lure Lana's jock-boyfriend Whitney to join them at a time when he's lost his scholarship and is worried about being stuck in Smallville forever.  The thugs also try to blackmail Lex over a computer disc they've looted from his house, so that once again Clark is in danger of exposing his powers to his devious friend when he Clark goes after the gang.  On some minor notes, Lana discovers that her aunt's shop/movie theater has been bought out by Lex, but she persuades him to let her manage the business in the hope of turning a profit.  This will not be the last "deal with the devil" Lana makes with Lex in the series, and in later seasons her yielding to temptation will have far greater consequences than Clark's accepting occasional favors from his shady friend.  Also, student journalist Chloe makes a joke about Clark Kent becoming an "investigative reporter."

The title of the episode "Zero" refers to a Metrpolis hot-spot, Club Zero, where three years ago Lex was involved with a shooting-fatality involving a man named Jude Royce.  Now Royce seems to have returned from the dead and started hanging out in Smallville in order to gaslight Lex.  The real culprit turns out to be the brother of a woman named Amanda, who committed suicide because of the death of her fiancee Royce.  However, Lex reveals the truth of what happened that night, which exonerates him of blame for the killing while Clark settles with the crazed brother, who is the first SMALLVILLE featured villain who doesn't have a kryptonite schtick.  The B-story proves more interesting, as Chloe undertakes a class project in which she interviews Clark and his parents about his adoption.  The episode alludes to some mysterious circumstances as to how Clark was adopted, but no details are revealed.

"Nicodemus"-- I don't know what a kryptonite-irradiated flower has to do with a Biblical Pharisee, but that's what Lex's pet scientist Hamilton names his new botanical specimen.  An employee of Lionel Luthor, seeking to curry favor with Lex's dad, steals the flower from Hamilton but wrecks his truck.  Jonathan stops to help and is the second person to be exposed to the flower's deadly pollen, which lowers a victim's inhibitions.  Jonathan becomes so frustrated over monetary worries that he seeks out the local bank, intending to blast someone with his shotgun.  Clark intervenes, and Jonathan accidentally-but-harmlessly shoots his super-son, which Oedipal strain causes him to pass out.  While he's in the hospital, Lana and Pete are the next two to become infected  Pete becomes jealous of Clark's friendship with Lex and goes hunting for the younger Luthor with a handgun.  Lana significantly does under the plant's spell what she clearly wants to do in reality: dumping Whitney and coming on to Clark.  While in this "temptress mode" she also tells Lex that she knows the "real reason" he funded her business, implying (as later episodes will confirm) that Lex has a thing for Clark's potential girlfriend.  Lana has the memorable line, "If life doesn't make you crazy, why bother living it?"

"Stray" concerns orphan boy Ryan, who possesses mind-reading powers, apparently not caused by krypton-radiation this time.  His crooked stepfather and the stepfather's girlfriend force Ryan to use his powers in stick-up jobs, so Ryan bolts, and is taken in by the Kents.  While the two crooks work to track down their meal-ticket, Clark bonds with Ryan as the brother he never had, but soon learns the facts about Ryan's abilities, most memorably telling Clark that Chloe-- who has always been just a "gal-pal" to Clark-- secretly wants Clark to ask her to prom.  Ryan also happens to be a comics-reading kid, whose favorite book is a Superman-like character called "Warrior Angel."  Lex collects the same comic book, which he claims was very important to him in youth, not least because the character is totally bald.  Lex also mentions his deceased younger brother Julian, telling Clark that when the boy died his parents became even more distanced from Lex.  At the same time, Lex, having made a successful go of running his father's Smallville business, gets a "devil's proposal" from Lionel, who wants Lex to join him at a Metropolis firm.  Lex decides to leave Smallville. He then gives Clark a going-away present: a fencing-foil-- significant to Lex because he was seen dueling his father with foils in an earlier episode, and significant to the Suprman-legend in that the character's dual identity took some influence from that sword-fighting crusader Zorro (which is what Chloe calls Clark when she sees him with the sword).  However, when Ryan's evil stepdad claims the boy, Clark rescues him, as well as aiding Lex when the stepdad clonks him. The experience changes Lex's mind, as he refuses his father's temptation, at least for the time being, and opts to stay with the only friend he has.
Posted by Gene Phillips at 2:24 PM
Email ThisBlogThis!Share to TwitterShare to FacebookShare to Pinterest
Labels: combative adventures, the marvelous