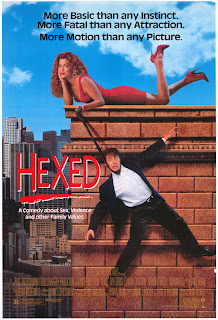 Given the advertising copy in the above promo, no skeptic can doubt that HEXED is a comedy riffing on thrillers like BASIC INSTINCT and FATAL ATTRACTION, in which men who hook up with beguiling temptresses with psychotic tendencies.  But though there's no question that the central antagonist of the film is a "perilous psycho," one can debate as to whether HEXED is a "naturalistic" or "uncanny" type of film.

Obviously this sort of decision is a lot easier when the film overtly channels familiar horror-tropes, as do works like PSYCHO or THE CAT AND THE CANARY.  But what about films that transpire entirely in a modern-day setting, without a spooky house or a costumed maniac anywhere in sight?

FATAL ATTRACTION, I have no doubt, falls into the naturalistic camp; the psycho therein is too "worldly" to suggest the ambivalences of the uncanny.  My jury-of-one is still out on BASIC INSTINCT, but there is a strong case to be made that the insanity in that film-- not entirely confined to the main psycho-killer-- shows more larger-than-life characteristics.  I can't say that HEXED-- which concerns the mishaps of hotel clerk Matthew (Arye Gross) when he gets mixed up with crazed supermodel Hexina (Claudia Christian)-- projects such a sense of insanity, as a plague corrupting everything in its path.

Still, Hexina herself does seem a larger-than-life psycho, even if her only reference to horror-tropes is when she briefly hisses like the Bride of Frankenstein.  HEXED starts out like a lot of less wacked-out comedies, with a nebbishy fellow impersonating someone else in order to seduce a woman with whom he'd normally stand no chance.  Yet HEXED could almost be taken as a slight satire of those sort of comedies, where the protagonist reaps the rewards of deception and doesn't have to do more than sweat a little.  After having sex with Hexina, Matthew gets dragged into a caper in which she tries to discourage a blackmailer.  Matthew finds out a little too late that Hexina considers herself above mortal law when she kills the blackmailer outright.  Hexina then framed Matthew for the crime, and the cops-- consistently played as brutal dunderheads-- fall for the hoax hook line and sinker.

A few apt details give Hexina the dimensions of an "uncanny psycho."  One such detail is her name, which also inspires the film's name and signifies a witch's spell (as well as being homophonous with "sex").  Her diva's attitude is another such aspect.  Hexina isn't given any deep psychological readings, but she does disclose to Matthew that she was once seriously obese.  In a sense she has "remade" herself as much as any horror-film plastic surgery, and with that remaking comes a manic disregard for human morality.  Last, in a climactic rooftop battle between Matthew and Hexina, Hexina shrugs off two or three direct blows from Matthew.  Granted, Claudia Christian is a tall woman, but Arye Gross isn't a tiny man, so her ability to take a lickin' and keep on stabbin' gives Hexina the larger-than-life dimensions of a true uncanny psycho.

Writer-director Alan Spencer's most well-known work aside from HEXED is probably the short-lived TV series SLEDGE HAMMER.  HEXED has the same essential go-for-broke atttide toward comedy, and so might be tough sledding for anyone not in the mood for that type of comic approach.
Posted by Gene Phillips at 10:50 AM
Email ThisBlogThis!Share to TwitterShare to FacebookShare to Pinterest
Labels: perilous psychos (u), the uncanny