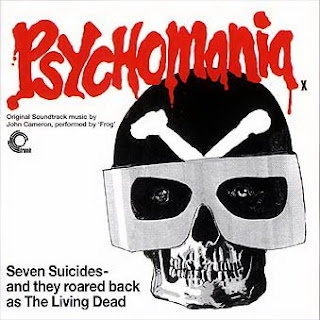 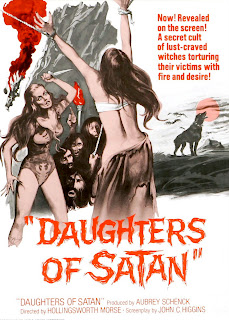 
Here’s two Satanic excursions this time out, but only one is as boring as hell.

PSYCHOMANIA is one of many British horror-films that portrayed new horror in the younger generation, this time in the form of a roguish motorcycle-gang led by Tom (Nicky Henson).  At the outset Tom, his girl Abby and the rest of the gang are content to “raise hell” by such mundane means as running cars off the road.  However, it happens that in the house Tom shares with his widowed mother and his creepy butler (George Sanders), there’s a special room that, in some vague manner, gives people contact with the powers of hell.  Years ago, Tom’s father entered that room, but he never emerged.  Tom’s mother (called a “spiritualist” in the credits) asserts that there exist powers that can enable one to come back from death, but only if one believes without doubt that one can do so.  Apparently Tom’s late father didn’t quite manage it.  Tom, however, survives the room, and comes out bearing a token of transcending his father’s failure: wearing his father’s lost glasses.  Next step: suicide as a means to become superhuman.

Abby is essentially a nice girl despite hanging out with the cycle-gang, the rest of whom are mostly nameless goons. She’s distraught by Tom’s death, but not as distressed as she is when he comes back from the dead, now immune to deadly force.  On a side-note, Tom also has to be buried with a little Satanic charm to make the spell work, which is one of the few things Sanders has to do in the film aside from standing around making cryptic comments.  Tom manages to talk all of the gang-members except Abby into killing themselves and coming back as biker-zombies.  In the end Tom’s mother chooses not to let his depradations go on and reverses the Satanic contract, with an evil outcome for both her and the gang.  Abby alone survives.

Some reviewers expressed a liking for the basic idea of this low-budget outing, if only because the “monsters” are reasonably original in conception.  That said, the budget-limitations assure that the invulnerable cyclists don’t do much of anything: the biggest stunt consists of Tom on his cycle crashing through a none-too-formidable-looking brick wall.  Henson projects good “bad boy” charm but the character of Tom is flat and uninvolving.  The music is appropriately spectral, but the zombies themselves are just guys on bikes, and don’t arouse any real frisson.

The Filipino horror-film DAUGHTERS OF SATAN is sleazy, but at least it knows what buttons to push.  Tom Selleck (a few years away from portraying Magnum P.I.) makes the mistake of walking into a Manila curio-shop and buying a painting of a historic witch-burning because he thinks the central figure in the picture looks like his wife Chris (Barra Grant).  As soon as Chris sees the picture, she starts having odd visions of Satanic sabbats.  In addition, a mysterious dog—one that resembles a similar canine in the portrait—shows up on the couple’s property and befriends Chris while growling at James.  Things go from bad to Satanic as in jig time Chris is drawn into a Filipino coven, through which she meets other Satanic “daughters” and realizes that she’s the incarnation of the witch in the painting.  Things don’t end well for James, who survives one murder-attempt by his devilish wife, though she ends up getting him in the end.

There’s no deep characterization here, but I did like one scene at the beginning, when James first shows Chris the witch-burning painting.   He regards the scene as merely “historical,” while she reacts negatively to the “sadistic” sight of seeing women burned alive.  If only DAUGHTERS had really concentrated on the sociological sex-war theme, it might have aspired to a classier title—perhaps—

Posted by Gene Phillips at 2:01 PM
Email ThisBlogThis!Share to TwitterShare to FacebookShare to Pinterest
Labels: the marvelous