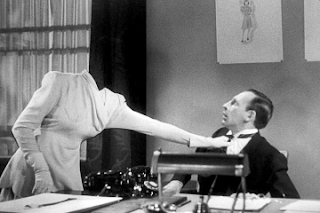 European emigres Joe May and Curt Siodmak, who had teamed up for the same-year-released INVISIBLE MAN RETURNS (with May directing), come together again to present a comic take on the "unseeable person" concept, though only contributing the story while one Edward Sutherland took over directing duties.  Most of the comic moments in the earlier two INVISIBLE MAN films tended toward silly farce, and the gender-flipping INVISIBLE WOMAN jumped into the silliness with both unseen arms flailing.

It's appropriate that Shemp Howard has a supporting role in WOMAN, because the plot here is simple enough to be recycled as a Three Stooges short (and may well have been).  Playboy millionaire Dick Russell (John Howard) goes broke as a result of his excesses, but there's hope for a financial comeback if Professor Gibbs (John Barrymore), in whose eccentric inventions Dick has often invested, can complete his experiments on an invisibility machine.  To test the machine Gibbs advertised in newspapers for a test subject.  Working-girl model Kitty (Virginia Bruce) answers the ad, mostly because she and her fellow models are constantly browbeaten at their job by an officious supervisor (Charles Lane), inspiring Kitty to see the gift of invisibility as a means of getting some payback.  Sure enough, as soon as Gibbs makes her invisible, she returns to her place of work and scares the heck out of her supervisor by pretending to be his "conscience."  Upon returning to the Professor's lab, new conflicts arise as Dick becomes intrigued with the unseen ingenue (but isn't quite willing to commit until he's seen the goods), and a group of bumbling mobsters intrude, wishing to use the Professor's invention for evil ends.

Wisely the writers abandoned the Wellsian concept that being invisible gradually unhinges one's mind, though at times Kitty does start acting a little too daffy for her own good, or anyone else's.  In the slapstick conclusion the invisible wench manages to clobber all the mobsters by clonking them from behind.  Then Dick, finally in love with her (because he's had a chance to see her, albeit briefly), arrives on the scene.  Kitty, wanting to force Dick to "fight for her," shoots a machine-gun in his direction, just so he'll feel properly motivated to come rescue her.

The most interesting function here relates to the sociological process by which women "construct" themselves to titillate and trap the male of the species.  Most of the invisibility effects concentrate on showing how well Invisible Kitty fills out various gowns, though this isn't enough for Dick, who argues that anyone who'd become invisible must not be much of a looker.  She beguiles him, though, by becoming only partly invisible, showing off (what else?) her legs.  It might've been more interesting to see him pledge his love before he knew what he was getting for certain, but as noted above he does get to see her visible self before taking the plunge.

Bruce's invisible charms notwithstanding, the best thing about INVISIBLE WOMAN are the familiar faces in the cast, which also includes Charles Ruggles, Oscar Homolka, and "Wicked Witch" Margaret Hamilton, who like Bruce shows a feisty side of womanhood by hitting a thug with a chair!

Posted by Gene Phillips at 2:15 PM
Email ThisBlogThis!Share to TwitterShare to FacebookShare to Pinterest
Labels: the marvelous