THE ADVENTURES OF SHERLOCK HOLMES (1939) 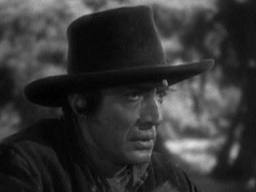 
The second of 20th-century Fox’s two period Sherlock Holmes ranks as one of the best adaptations of the famed sleuth into cinema—surprising, given that it builds upon an unlikely source, the same William Gillette stage-play that resulted in the mixed bag of the 1922 SHERLOCK HOLMES.  It would appear (given that I’ve only read summations of the play) that the producers of ADVENTURES reached their level of excellence by throwing out everything in the play except the core idea, that of Holmes tilting lances once more with his old foe Professor Moriarty.

Many of the Sherlock Holmes tales and films fall within the Fryean mode of the “drama,” in that their thematic focus is less upon the hero’s invigorating accomplishments than on the nature of the mystery he must solve.  ADVENTURES is a rare Holmes that matches up best with the “adventure” mythos, however.  In comparion to both Fox’s previous HOUND OF THE BASKERVILLES and the later Universal films also starring Basil Rathbone and Nigel Bruce, ADVENTURES presents a Holmes who fights and shoots like a pulp hero.  To be sure, this Holmes is still much more restrained than the modern Robert Downey Jr. incarnation.  But the epic combat of Holmes and Moriarty is played for all its worth here, rather than being “seen” via indirect means as in Doyle’s “Final Problem,” or reduced to a crime-melodrama as in the 1922 silent film.

As in the stage-play, this Moriarty (George Zucco) plans a great crime to baffle his frequent foe.  But the writers of this Holmes film give audiences a Moriarty who isn’t just a criminal, but a near-Nietzschean worshipper of strength alone.  An opening courtroom scene presents the sight of Holmes frustrated in his attempt to bring Moriarty to justice for murder.  The enemies’ subsequent verbal sparring establishes their grudging respect and Moriarty’s determination to tempt fate, to thwart Holmes in an even more humiliating fashion.  In a later scene, Moriarty mocks one of his minions even as the man has a shaving-razor to the villain’s throat. Such is his mental strength that he’s not afraid of a weak man even when the latter has total advantage.

A further development from the play is that this Moriarty decides to put forth a complicated ruse to distract Holmes from the villain’s real target—a ruse that involves Moriarty using an agent to kill one innocent man, and then threatening the victim’s sister Ann  Brandon (Ida Lupino) as well.  Lupino, a few years away from stardom, nevertheless gives a strong performance as an ordinary woman who fears the power of the murder-plot against her and yet does her best to help Holmes where she can.

Moriarty’s assassin—not seen fully until a climactic “reveal”—comes very close to edging the film into the phenomenality of the uncanny.  Though he’s a purely human killer, given the name “Mateo” in the credits only, he’s always either seen at a distance in the omnipresent London fog or heard as he plays a monotonous tune—described as an “Incan death-dirge”—on his flute.  Because he not only kills Ann’s brother but may have had something to do with the previous death of her father (the script seems vague on this point), Mateo takes on the resonance of a death-spirit stalking his prey.  He also projects the image of freakishness, in that he leaves footprints resembling those of a clubfooted man, but this turns out to be another ruse.  His method of killing is almost exotic enough to qualify as an “outré device” that fits the mode of the uncanny. However, the weapon-- a South American bolas-- doesn’t come up to the level of uncanny devices examined elsewhere on this blog, as noted in (for instance) my review of THUNDERBALL.  An uncanny device in my reckoning has to be an artifact that seems overly complicated in terms of pure utilitarian aims, as with the electric chair that the villainous Blofeld uses to off one of his underlings in the Ian Fleming book.

The entire cast distinguishes itself as much as the aforementioned Lupino, with standout performances from Rathbone, Bruce, and George Zucco.   Both Holmes and Watson are a little more fleshed-out here than in many of the future Universal films, which tend to make the characters into not-quite-so-human icons.