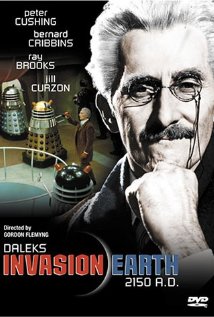 Adapted from the BBC's "Doctor Who" teleseries scripts, this film offers an alternate version of the Doctor's second encounter with his most popular villains, the mechanized Daleks.  However, in both this theater-film and its previous companion-piece DR. WHO AND THE DALEKS, the main character's legend was drastically altered. The Doctor, originally conceived as an alien "Time Lord" who bounced around various eras in his time machine fighting (for the most part) other aliens, is now an Earth scientist (here played by Peter Cushing) with his own time machine, who never gets a workout against any foes other than Daleks.  In addition, whereas the teleseries' conceit was that the Doctor never had a name as such (so that "Doctor Who" is simply a wry commentary on his namelessness), this version is literally named "Doctor Who."

The story is a pretty simple liberation-from-tyranny drama, as Who, his niece and granddaughter, and a comically confused cop named Campbell travel to Earth in 2150 AD to save the human race from destruction by the Daleks.  The look of the Daleks and their ship is superior considering that INVASION is a fairly low-end production, but the design elements are really the only standouts in the otherwise pedestrian tale. The sociological metaphor behind the conception of the Daleks, in which they're revealed to be atrophied humans who inhabit super-powerful mechanical forms, is never exploited.  This suggests, as with the excision of the central character's "Time Lord" background, a desire on the part of the film's producers to simplify the teleseries' content as much as possible.

Bernard Cribbins as confused Campbell comes off best in the acting department, as he gets all the best lines.  Peter Cushing does an adequate job with the uninspiring material, but even he can't get blood from this particular turnip.
Posted by Gene Phillips at 5:19 PM
Email ThisBlogThis!Share to TwitterShare to FacebookShare to Pinterest
Labels: the marvelous