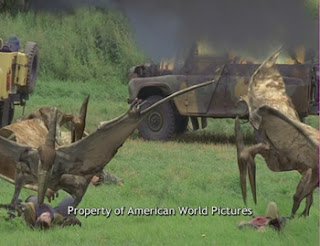 
The only reason I chose to bracket these two minor Syfy-Channel offerings—aside from the fact that I saw them close together—is that they are examples of the Campbellian function I seem to be reviewing with the least frequency here: the cosmological, which projects knowledge of the physical world into fictional forms.
EARTHSHOCK is a dull imitation of 1998’s ARMAGEDDON.  This time a meteor impacts on the moon and causes the deformed satellite to bring about world-wide "earth-storms."  In a minor nod toward verisimilitude-- though most of the science of the film has been trashed mercilessly in reviews-- EARTHSHOCK doesn’t send a whole team of amateur astronauts to the moon as did ARMAGEDDON.  Instead real astronauts take along just one blasting-expert in order to destroy the meteor.  There’s also a confusing debate about the mineral composition of the moon: a bad know-it-all character (Dirk Benedict, looking bored in the role) thinks that the moon’s internal composition will allow it to block the meteor, while a good know-it-all character (your basic prissy gal-scientist) knows just the opposite.  By the time one sits through all the talk-talk, the viewer may wish to see that particular Earth blown to smithereens.
PTERODACTYL isn’t any more complex, but at least it has lots of blood-and-guts, as well as being a late work from producer/director Mark L. Lester, noteworthy for such 1980s productions as FIRESTARTER and COMMANDO. The script's sole source of cleverness consists in giving various characters the surnames of famous SF-authors, such as Heinlein and Zelazny.  It’s a Professor Lovecraft who initiates the adventure, taking a group  of paleontology students into a remote area on the Turkish-Armenian border.  They stumble across some very animated “fossils” when they’re attacked by a flock of hungry pterodactyls.  They survive for a while because Lovecraft’s group joins forces with a detachment of American soldiers, but one by one even the armed soldiers start biting the proverbial dust.  Many gun-battles and bird-chompings ensue, and the cosmological theme only emerges when Lovecraft tries to advise the soldiers as to what areas may be vulnerable on a pterodacyl’s body.  The characters are a tiny bit more engaging than those of EARTHSHOCK but are still nothing special; the actors do what they can.  The ‘dactyls are better-than-average CGI, at least compared to many many worse films endlessly recycled on the Syfy channel.

Posted by Gene Phillips at 1:54 PM
Email ThisBlogThis!Share to TwitterShare to FacebookShare to Pinterest
Labels: the marvelous