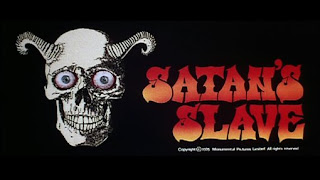 Despite the presence of horror-icon Michael Gough, SATAN'S SLAVE is just an average 1970s "Satanic exploitation" flick, competently directed by Norman J. (INSEMINOID) Warren and written by David (HOUSE OF WHIPCORD) McGillivray.  There's no specific Satanic mythology or philosophy expoused here. Satanism is merely the core around which the filmmakers build a "family romance" which involves transmigration of souls from the older to the younger-- a theme pulled off better a few years later in the Aussie horror-film ALISON'S BIRTHDAY.

The main story is frequently interrupted by non-diegetic scenes of bloody violence against women, usually though not always by men.  Presumably these scenes-- including the one that opens the film-- were included just to "goose" the rather slow progression of the main plot, even though when that plot does get going, it has its own bloody moments.  I've seen more than my fair share of gore scenes, and have become innured to 90% of what appears in modern films, but I will say that a couple of bloodlettings in SLAVE impressed me.

Following  a couple of the aforementioned gratuitous gore-scenes, the real action gets going as young Catherine rides with her mother and father to visit the country-house of her uncle Alexander (Gough), who lives with his only son Stephen and a secretary, Frances.  Just as they're nearing the house, the father accidentally drives the car into a tree.  Catherine is thrown clear but it seems both father and mother are trapped in the car as it goes up in a blaze of fire.

Shortly later, she's recovering in a room of the country-house, where she meets all the residents.  Catherine expresses doubt that a car should have caught fire from such a crash, but Alexander fobs her off with some excuse and she begins settling in at the house in order to recuperate.  She seems to accept her parents' deaths rather easily given that she never sees any bodies, attends an inquest or speaks to a coroner.

Soon she's recovered enough that she's responding favorably to romantic attentions from her first cousin Stephen, as he complains about how his father "always wanted a girl."  Given the soul-transference theme this might have proved more fertile ground that the actual storyline: where might the story have gone had it involved Alexander using magic to "make" a daughter by transferring Stephen's soul into Catherine's body?  However, as noted above Alexander's real plan is more along the lines of the 1932 MUMMY: he lost his wife in an earlier ceremony (the purpose of which is not stated) and wants to reincarnate her in the body of his niece.  In other words, the slogan here is "double your incest."

Toward the end Catherine gets shocked out of her passivity.  Frances, who's had been having casual sex with Stephen up until Catherine's arrival, resents being tossed aside.  She tells Catherine the whole Satanic scheme, which action results in Frances' death and Catherine's flight.  The Satanists catch her, but she escapes after stabbing Stephen in the eye (the film's best scene).  Running into a nearby forest, she seems to have escaped, only to run into-- her father, hale and hearty and not dead from a car-accident.  He soothes her and takes her back to the country-house, telling her that she's just had a bad dream...

...and if you believe for a minute that the film's going to end on a positive note, you've never seen a 1970s horror-film.

The myth-function here is psychological, but Warren and McGillivray don't do anything very interesting with the implied incest-motifs.
Posted by Gene Phillips at 2:20 PM
Email ThisBlogThis!Share to TwitterShare to FacebookShare to Pinterest
Labels: the marvelous