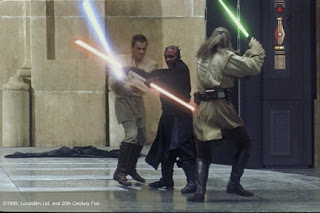 
In terms of characterization, the early and late works of George Lucas bear an interesting parallel to the early and late works of Gene Roddenberry. Both men pioneered radical new approaches to the science-fiction genre—at least in terms of the genre as presented in film and television.  In both the first STAR WARS trilogy and the “Classic” STAR TREK teleseries, much of the popularity of each franchise depended on the appearance of vivid, seemingly three-dimensional characters.  However, when in later years both Lucas and Roddenberry put forth new iterations of their most famous franchises—i.e., the second STAR WARS trilogy and STAR TREK: THE NEXT GENERATION—both creators centered their stories on comparatively inert central characters.  I’m tempted to believe that as both men grew older, they felt distanced from the more spontaneous, freewheeling charms of characters like Skywalker and Kirk, and for that reason invested themselves in such sententious characters as Qui-Gon Jinn and Jean-Luc Picard.

That’s as far as I’ll take the WARS-TREK comparison here, though I will add that I believe Lucas got more negative criticism than Roddenberry for his later works.  Of course, Roddenberry’s TREK at its best never captivated audiences as widespread as those of Lucas.  Morever, Roddenberry’s works were always mitigated by controls from Paramount, while it would appear that nothing prevented Lucas from doing anything with his franchise that he pleased.  But I feel much of the critical hostility toward the Second Trilogy, as I’ll now term it, stems from the fact that this prequel to the First Trilogy didn’t give audiences characters that proved as beguiling as Luke, Leia and Han.
Action, set design, costumes, optical effects—these are as good as anything from the First Trilogy, particularly the attack-droids called “destroyers,” who give young Obi-Wan Kenobi and his mentor Qui-Gon Jinn a rough time in the film’s first half-hour.  But the Jedi themselves are about as engrossing as Friday and Gannon from Jack Webb’s DRAGNET teleseries.  From the main characters’ dialogue we know that the galaxy-spanning Republic served by the Jedi Order stands in danger from various forces, though we never feel any passion from these characters about the matter.  The foremost danger is a separatist group called the Trade Federation.  The Federation takes possession of the sovereign planet Naboo and then attempts to get the galactic Senate to accede to the takeover as a fait accompli—a fictional event with interesting though coincidental resemblances to the United States’ takeover of Iraq in 2003.

The two Jedi aid the escape of fugitives of Naboo’s two races, including Queen Amidala, official represenative of Naboo’s human residents, and Jar Jar Binks, official comic relief and very unofficial representative of the aquatic race called Gungans.  On the way to the Senate’s planet, the Jedi’s spacecraft crashes on a planet with the familiar name of Tattooine. Needing parts to repair the ship, Qui-Gon learns that the only dealer who can supply those parts is a hard-fisted butterfly-alien named Watto, who won’t accept Republic credits for the parts.  Qui-Gon also meets a young boy named Anakin, the slave of Watto, and the Jedi recognizes that the “force is strong in” this boy.  Through a very involved plotline that perceptibly slows down plot-development, young Anakin ends up participating in a “pod-racing” competition in order that Qui-Gon can win money for the parts and Anakin can win freedom from slavery—though unfortunately Anakin's mother Shmi remains a slave on Tattooine.

Prior to the Jedi’s ship taking off, Qui-Gon and Obi-Wan are attacked by a demonic looking individual wielding his own version of a lightsaber.  Both Jedi escape, taking Anakin, the queen and the queen’s retinue (including a very Leia-ish young woman named Padme) on to the Senate planet.

Once there, The Queen—who is actually “Padme,” having hidden in plain sight while a decoy pretended to be the real queen-- seeks to plead for her planet’s freedom before the Senate.  The bureaucracy stymies her efforts.  One senator, the mysterious Chancellor Palpatine, uses Naboo’s situation as a stepping-stone to raise himself to a position of undisputed power in the Senate, but this doesn’t do the oppressed planet any good.  Conversations between Qui-Gon and his Jedi allies reveal the possibility that the strange lightsaber-wielder is one of the Sith, long thought extinct.  However, since by this time audiences have seen Palpatine in the company of the Sith “Darth Maul,” the conclusion as to Palpatine’s relation to the “dark side of the Force” becomes evident even without having seen the First Trilogy.

Qui-Gon endeavors to make his fellow Jedi consent to training Anakin for their ranks, despite the misgivings of Yoda.  Then Padme decides that, having failed to gain the Senate’s aid, she must return to her people.  The Jedi take her, her retinue and Jar Jar back to Naboo, and begin efforts to oppose the tyranny of the Trade Federation—which is actually controlled by a shadowy figure who isn’t expressly identified with Palpatine, though the same actor plays both.

The climactic battles—rebels battling invading forces, the Jedi engaging once more with evil Darth Maul—are largely well done, with one grating exception: little Anakin.  It’s unclear why Qui-Gon takes him along, as the Jedi clearly doesn’t mean him to be part in the battles.  Of course, being the father of future hero Luke Skywalker, Anakin does prove important to winning the war for Naboo’s freedom, but Lucas’ use of him is contrived and fails to grow out of any natural character traits.

With the exception of Natalie Portman, who does an exceptional job with Padme, the acting is acceptable if never riveting.  Kid-actor Jake Lloyd, however, is allowed to speak and emote as if he’s some video-game-playing kid from a suburban neighborhood.  At no time does he even attempt to suggest the bearing or psychological hang-ups of his future self Darth Vader.

On the plus side, there are some strong sociological-myth motifs here, that will be more fully realized in ATTACK OF THE CLONES; thus I’ll defer exploring them until I review that film.  However, only in MENACE does Lucas expound, however erratically, on a major metaphysical motif of his cosmos: the fact that Anakin Skywalker is of virgin birth.  This monumental development is explained in a few tossoff lines that establish that the people of Lucas’ cosmos have microscopic entities called “Midichlorians” in their cells, that aid sentient beings in their manipulation of the Force and that apparently quicken the womb of Shmi Skywalker for reasons never fully disclosed.

It’s hard to figure out why Lucas incorporated this myth-motif.  Obviously in a Judeo-Christian culture it’s impossible to speak of “virgin birth” without making an allusion to the Christian Messiah, but nothing in the script of MENACE suggests that Lucas is overtly commenting on any aspect of real-world religion.  It’s interesting, though, that the Jedi, who are portrayed as high-tech shamans, are destined to be almost entirely wiped out by an anti-savior (a "slaughter of innocents?") in a manner loosely analogous to the destruction of pagan culture by Christians.  But Lucas definitely doesn’t evince the philosophical stance of a neopagan.  It’s possible that in his world, the “virgin birth” merely suggests the same sterility exemplified by the Sith themselves. Ironically, that sterility is destined to be overthrown by the virgin’s naturally produced son.