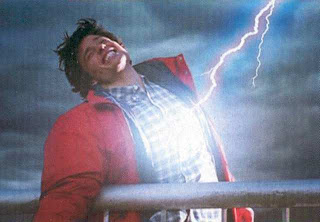 The next four entries to Season 1 swing upward in terms of their mythic qualities.

"Rogue" is not one of these, however.  In a thoroughly pedestrian blackmail story, a corrupt cop named Phelan comes to Smallville hoping to bleed money from Luthor thanks to Phelan's knowledge of Lex's checkered past.  Lex blows Phelan off.  However, Phelan has the good fortune to witness one of Clark Kent's super-feats.  Phelan tries to force Clark to break the law in order to feather Phelan's nest, but the gambit backfires so that Phelan dies and Clark's secret is preserved.  At the same time another face from Lex's past shows up: old flame Victoria, daughter of one of Lionel's rivals.  She's sent to dicker with Lex on behalf of her father's company, but she isn't above "business with benefits."  In a rather pallid B-story the high school principal fires Chloe from the school newspaper.  Chloe's association with the paper has been minor up to now, with more narrative time devoted to her Scooby-Doo activities, but plainly the producers meant Chloe, snoopy newspaper writer, to echo another snoopy newspaper writer from the Superman mythos, one with a rather similar first name.  Lana tries to defend Chloe to the principal, who ends up giving Lana the editorship.  It's an unlikely move for a principal but it provokes a quarrel between the two girls which, as devotees of soap opera all know, is really about something else-- or rather, someone else.  The hatchet is eventually buried with no ill effects.  On a minor note, when Phelan sets up Jonathan Kent on a phony murder charge and gets Kent sent to jail, Clark almost loses it, feeling, apparently for the first time, a desire to kill-- the first glimmer of a "dark side" in the hero than many later episodes exploit.

"Shimmer" is more complex in both psychological and sociological terms, in that it considers the "upstairs, downstairs" aspect of rich boy Lex's world.  Amy, a high-schooler who helps her mother clean Lex's mansion, falls for Lex and strongly resents Victoria.  Then an invisible being commits violent acts, such as beating up a bully who taunted Amy.  Is it Amy herself, given that she's a retiring person and servants in Lex's world are trained to be, as the script says, "invisible?"  The plot's pretty "transparent" as to the real culprit: Amy's brother Jeff, who's found a kryptonite-tinctured invisibility formula. Indeed, given that he's portrayed as being even more retiring than Amy, he has no real reason to be in the story except to function as the least likely (or noticed) suspect.  The psychological dynamic of Jeff toward his sister is peculiar, in that he really wants Lex to return Amy's love, even though, as Lex points out to Jeff:

"that kind of love can get me arrested"

One is led to suspect that Jeff has some subterranean feelings for his sister that he's redirecting in his otherwise unmotivated matchmaking frenzy.  Not surprisingly, the script doesn't delve that deeply. In another plotline, Lana and her regular boyfriend Whitney quarrel, and Lex advises Clark to take advantage and move in.  Self-sacrificing Clark naturally wants nothing more than Lana's happiness and even facillitates a reunion between Lana and her current beau.

The oddly titled episode "Hug" actually deals with not one but two meteor-freaks who can exert temporary hypnotic control upon their victims through the medium of a handshake.  A backstory reveals that the two men, Kyle Tippet and Bob Rickman, were salesmen who learned that meteor-power gave them irresistible power when "pressing the flesh."  But while Rickman continued to use the power to evil ends, Tippet became disgusted and took refuge as a hermit in a forest neighboring Smallville.  Rickman comes to town to persuade Jonathan Kent to sell his farm, which he does, thanks to a "handshake deal."  Rickman then butts heads with both Clark and his old buddy Tippett.  Rickman sends various catspaws against Tippett, and when Clark becomes a nuisance, Rickman mesmerizes Lex and sends him to kill Clark, yet another in-joke reference to the future "friends who become enemies" trope.  In this episode Clark learns for the first time that he's bulletproof, and Lex clearly witnesses the phenonomenon, but the latter forgets what he's seen when he emerges from the hypnotic haze.  Knowing Rickman for a murderer, Tippett forces the villain to kill himself.  However, because he's also witnessed Clark's powers-- one of the first characters to do so and survive-- he swears to use his power for good in future.

"Leech" sounds like it ought to be a story about some version of Superman's foe the Parasite.  Instead, it's a power-transfer story.  Eric, bullied by both his peers and his overbearing teacher-father, falls prey to a lightning-strike while holding a chunk of kryptonite: Clark tries to save Eric and gets zapped as well.  Clark becomes entirely mortal while Eric begins developing super-powers.  Clark, though taken aback at the limitations of mortality, nevertheless welcomes the idea of no longer being inhuman, and even Lana comments that he no longer seems to carry the weight of the world on his shoulders.  In addition, Lex, who has continued to believe that Clark's not entirely normal, confronts him.  Following the example of many classic Superman comics-stories, Clark is able to show Lex that he's as mortal as anyone in this depowered state, thus temporarily throwing Lex off the trail.  Predictably, Eric begins to use his abilities openly, and becomes drunk with power(s).  In another trope dear to the comic books, Clark finds that he can now handle kryptonite with impunity, though it's fortunate he isn't exposed to the mineral long enough to transform, as do most Earthpeople, into some sort of freakazoid.  Another exposure of lightning and electricity reverses the transfer.  However, Eric returns in a 2004 episode, where he does assume something of the role of a Parasite-style figure.  In a conclusion of the Victoria B-story, Lex cleverly takes advantage a plot laid against him by the woman and her father.  The result is that the two of them are set up for a hostile takeover of their company.  That company happens to be named "Cadmus Labs"-- a tip of the hat to the "Project Cadmus" of Jack Kirby's JIMMY OLSEN comics.  As with the Kirby creation, these labs too will be a key factor in spawning monstrous foes for this series' protagonists.
Posted by Gene Phillips at 3:07 PM
Email ThisBlogThis!Share to TwitterShare to FacebookShare to Pinterest
Labels: combative adventures, the marvelous