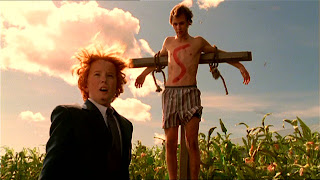 For some time I've been fascinated with the way the 2001-2011 series SMALLVILLE played with the mythic content of the SUPERMAN concept.  I've decided to devote a portion of my reviews to tracing its major motifs and themes, inconsistent though they often were in a continuing soap-operatic series.

I've reviewed TV-show collections here before but as this is more labor-intensive, I'm going to "count" each viewing of four consecutive episodes as having the value of one "movie," to satisfy my statement here that I would now try to turn an average of one film-review for each day of a given month.

The credit for the rethinking of the Superboy legend for a teenage audience, somewhat brought together by the examples of earlier syndicated shows like XENA and BUFFY, usually goes to writer-producers Alfred Gough and Miles Millar.  Their scripting for the first episode sets the tone of the series on through its conclusion in 2011: one which was, like BUFFY THE VAMPIRE, heavily layered with witty repartee and pop-culture references.  SMALLVILLE arguably shared a weakness with BUFFY, at least in the first season.  Too many episodes featured some disposeable "monster of the week" who existed just to give the not-yet-Superman a quick workout in between exchanging meaningful looks with friends, family and girlfriends.

The standout myth-image of the first episode, titled "Pilot," is easily the image of young Clark Kent strung up on a cross in a cornfield.  It wasn't the first time Superman had been placed in some rough "Christ-on-a-cross" scenario.  However, Millar and Gough, while certainly aware of the parallel, cleverly retooled the image to one with the rural associations necessary to Clark's home in Smallville, Kansas.  This version of Smallville has a folksy tradition in which teenage boys torment a victim by tying him up on a scarecrow-pole and painting an S" on his chest-- "S" for "scarecrow." The audience sees the ritual enacted first upon Jeremy Creek, a local guy, but this also transpires on the day when a super-child descendst from heaven. The rocket from Krypton crashes in the cornfield where Jeremy stands bound, and radiation from the rocket has effects on Jeremy that later cause him to become the series' first "monster of the week."  The crash also has a decided effect on another occupant of the field: 9-year-old Lex Luthor, who loses his hair thanks to the incident-- either from trauma or from exposure to Kryptonian radition; the script doesn't specify. Twelve years later, teenaged Clark Kent is the next victim of the scapegoating ritual, but extrinsicially the audience watching knows that the "S" on his chest is going to signify something diametrically opposed to a victim, even if Clark does undergo some "suffering on the cross" that he'll later internalize into a cross-bearing mentality.

The greatest innovation Millar and Gough bring to the Superman mythology is the implied insight that the descent of super-power from the heavens doesn't just solve all problems, a strong implication of the early Siegel-and-Schuster series.  In addition to the rocket's own radiation, it brings with it chunks of kryptonite, which in this iteration (contrary to most earlier comics) can have mutating effects on Earthmen, usually bad ones in the early seasons.  On top of that evil side-effect of the hero's advent, some of the debris pulled in the wake of the rocket crashes in Smallville, killing the parents of a little girl named Lana Lang, destined to become teenaged Clark's sweetheart.  However, once teenaged Clark has been apprised of his alien origins and learns the effect of his "birth" upon his adoptive world, he compensates for his guilt by becoming a covert hero, using his barely-understood powers (at first, just super-strenght, super-speed and super-hearing) to help people. One of his rescuees is young Lex Luthor, who responds to Clark's nobility by trying to befriend the young man, setting the stage for a much-anticipated "friends who will someday turn enemies" motif.

Thus, in this story that takes place before Clark forms his identity as Superman or meets Lois Lane, Clark finds himself in another sort of "triangle."  His advent has caused pain and trauma for Lex and Lana, and so he conceals his alien heritage from them, despite his feelings for them as, respectively, a potential friend and a potential lover. Clark's godlike super-powers become the big soap-operatic secret he must continually hide from them, even as his desire to save lives threatens him with exposure as an alien.  To a similar but lesser extent, he also strives to keep the same secret from his high school buddies Chloe and Pete, who become his unofficial aides in investigating weird happenings (with Chloe even covering a wall with data about those happenings, what she calls her "Wall of Weird.") In later episodes both of them learn Clark's nature and become more involved in helping him.  Since Lana and Lex don't learn as quickly, it's a given that the reactions of the two "LL's" is meant to be more important to the ongoing narrative.

"I'm the Fort Knox of secrets," Clark tells Chloe when she wants to confide in him.  This is the most consistent theme of soap-operas: the attempts of various characters to forge trust with family and friends, only to feel that trust betrayed by the keeping of secrets.  Again, this theme remains largely consistent throughout the series ten-year run.

Most of the episode's narrative time is lavished on introducing all the regular players, including Lionel Luthor, a "bad father" to young Lex who is the symbolic observe of Clark's "good parents" the Kents.  Thus it's not surprising that the "villain" Jeremy Creek, the first victim of kryptonite mutation, isn't much of a participant in the story.  It's not even very clear why he disappears for twelve years and then shows up thirsting for vengeance on the jocks who inadvertently caused his mutation.  He shoots around some electrical bolts, gets defeated by the proto-Superboy (again, without anyone seeing the super-feat) and disappears.

The next three episodes-- "Metamorphosis," "Hothead," and "X-Ray"-- follow the same pattern, advancing the threads of the soap-opera plot while a disposeable menace threatens lives and property.

"Metamorphosis" starts the ball rolling on "meteor-freaks" who mutate in concert with their hidden desires. In this episode the mutant is insectphile Greg Arkin, whose name is a play on "Gregor Samsa," the protagonist of Kafka's "Metamorphosis."  That author gets a quick mention in the script, as does the name of Nathanel West, though nothing in the script cites the novel for which West is best known: the no-less-thematically-appropriate "Day of the Locust."  Since Greg is buggy about bugs, kryptonite mutates him into a roadshow version of "The Fly," and he plans to make a special cocoon for his beloved Lana.  In other plot-threads, Clark's ability to fly, dormant up to this point, manifests briefly when he's having a "happy dream" about Lana-- Freudian jokes are practically de rigeur at this point-- but this ability remains cut-off to him for almost the entirety of the series, since for the producers it connotes the assumption (or Assumption?) of true Superhumanity. Lex has his first encounter with Lana, which contains a very light suggestion of possible future romantic entanglements (at some younger age Lana once saw Lex getting it on with some poolside passion-partner).  Lex also has a very minor role as a tempter-figure, encouraging Clark to rat out Lana's boyfriend for certain misdeeds; when the noble Clark won't do it, Lex essentially does the evil that his "other self" won't do.  Clark's battle with Arkin seems to destroy the "bug boy." but the character apparently survives as he turns up later in a 2010 episode.

"Hothead" is a mild change of pace in that it's a middle-aged man, rather than a teenager, who starts displaying murderous super-abilities.  The coach of Smallville High, a negative "father-figure," faces dismissal for having given test-answers to some of his football players; he then finds he can unleash living flames against anyone threatening his position.  The running narrative stresses the conflict of the three major characters with regard to their parental figures: their instinct to imitate their parents and yet their need to forge their own identities.  Naturally, while Clark and Lana can forge their identities against more or less sympathetic figures-- the Kents, Lana's adoptive aunt-- Lex's struggle against his domineering father is framed as a losing battle

"X-Ray" is the best of these three, in that this time the villain, Tina Greer, can assume the shape of anyone she chooses, which makes for some disruptive sights (Phony Lex assaults Clark, thus anticipating future clashes between future versions of Luthor and Superman).  At the same time Clark suffers the onslaught of X-ray vision for the first time.  The future Superman doesn't *intentionally* use the power to look into the girls' locker room and witness near-naked Lana; things just *happen* to work out well for him in that regard.  Tina, for her part, suffers from such a poorly formed identity that her game plan is to kill Lana and take over her life.  Clark defeats Tina in part because his new power allows him to ferret her despite her disguises.  Lastly, a new plot-thread develops in that Lex becomes suspicious of the easy way Clark saved his life, and sets a reporter to investigate the matter-- setting in motion a long-running subplot in which he, rather than Lois Lane, continually conspires to learn the nature of the mysterious hero.  The episode also features the first allusion to the Daily Planet in Metropolis.

Posted by Gene Phillips at 3:50 PM
Email ThisBlogThis!Share to TwitterShare to FacebookShare to Pinterest
Labels: combative adventures, the marvelous