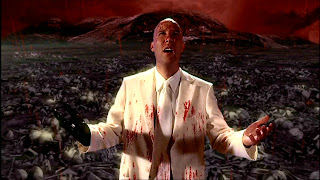 The quality of the next four episodes of Season 1 drops precipitately, and the reason's painfully clear: too many disposeable monster-menaces, in extremely bland and predictable plots. While many superhero comics have been no less bland and predictable, at least even the bad ones even show some awareness as to what's needed to build a good "rogue's gallery." In its ten years SMALLVILLE would never be known for originating any truly memorable villains or even decent monsters. However, over time the show's producers did a better than average of job of doing the same thing they did for Luthor in the first season: radically rethinking the best Super-villains the comics had to offer.

"Cool" is one of the least distinguished of the first season.  "Cool guy" Sean Kelvin (haha, like the temperature measurement) drowns in an icy lake with kryptonite at the bottom.  He comes back as a "heat vampire," ceaselessly needing to suck heat from living beings in order to keep warm.  In a more interesting development, Lex-- who is now running the local Luthorcorp plant but refuses to exploit the locals as his father wishes-- begins to become the town's new "angel of mercy." In a manner parallel to the way Clark covertly uses super-powers to save lives, Lex uses his capital to attempt saving the locals' fiscal futures.  He particularly tries to be of help to Jonathan and Martha, but Jonathan refuses his help, citing his previous bad dealings with Lex's father.  Later episodes will expand on the history of Jonathan, Martha and Lionel in far greater detail.  Lex tells Clark he's like the "younger brother I never had." A few episodes later Lex reveals that he really did have a younger brother who died, though the reasons for the brother's death aren't revealed until several episodes later.

"Hourglass" is another tale dealing with the depredations of the older generation.  While Clark and Lana are doing community service at an old folks' home, they encounter two oldsters who have been given special abilities by meteor rocks.  One woman, Cassandra, has been blind for years from exposure to a fallen meteor, but she gained prophetic powers, though unlike her Classical Greek counterpart, this Cassandra earns full belief from Clark.  Harry Volk, the other recipient of Krypton-power gains it more abruptly: he falls into a lake that has kryptonite at the bottom (hmm, just like "Cool") and devolves from sixty to twenty years old.  As it happens, Volk-- whose name means "wolf" in Russian-- has nursed certain grudges for years, so a second lease on life means a return to the killing ground.  Meanwhile Clark worries at an ambiguous prophecy from Cassandra, but though he thinks his father's life stands in peril, it's his mother Volk goes after.  Cassandra's prophecies don't seem entirely reliable in the episode, but Lex never gets to find out for himself.  The moment she takes his hand, he sees himself becoming President of the United States (a touch at a similar development in the SUPERMAN comics of the period); however, his reign is ended by countless implicit deaths and a literal "rain" of blood. However, the content of this vision is rendered suspect by the fact that Cassandra dies in the midst of making it.

"Craving" is another vampire-story.  This time Clark's heavyset classmate Jody begins drinking kryptonite shakes.  She loses weight and becomes a beauty, but now her belly needs more than ordinary food to fill her "craving." This makes her a direct threat to Clark's friend Pete when Pete makes a dinner-date with Jody, not realizing that he may become dinner.  The episode does have some interesting smaller moments.  Lex happens to visit Chloe's "Wall of Weird," which is the first time he seems to encounter the idea that the meteors are the principal cause of the local mutations.  He also reveals to Clark for the first time how he lost his hair, which naturally causes Clark to become guilty and apologetic.  Unlike the comic-book Luthor, Lex is philosophical about his hair-loss, claiming that it defines who he is

In one early episode Jonathan Kent suspected that Luthorcorp's ruthless experiments were more likely to be the source of the mutations than a bunch of meteor-rocks.  "Jitters" has the best of both: Earl Jenkins, a man who once worked at the Kent farm but left to work at Luthorcorp for more money, returns to town seeking to find out what the company used on him that infected him with "the jitters." This weird condition, implicity linked to kryptonite exposure, causes his body to vibrate wildly and unleash destructive surges.  Unlike other meteor-freaks he seems to give off radiation that weakens Clark when the hero draws near, making Earl loosely similar to some of the comic book's "kryptonite man" type of foes.  Earl ends up invading the Luthorcorp plant and taking as hostages Clark's class of visiting students.  The commotion draws Lionel to the scene, effecting the first re-acquaintance of the devious billionaire with Jonathan and Martha, though the scene gives no indication as to just how much exceedingly-involved soap-operatic history the three share.
Posted by Gene Phillips at 3:18 PM
Email ThisBlogThis!Share to TwitterShare to FacebookShare to Pinterest
Labels: combative adventures, the marvelous