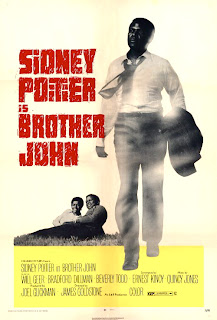 Trapped in the meandering metaphysical film BROTHER JOHN is a spark of well-intended moralizing, but there's no real depth to it.  It might have done well as a thirty-minute episode on Rod Serling's TWILIGHT ZONE, but the script can't sustain 90+ minutes' worth of interest, despite some excellent performances.

Will Geer gives the best show, as a doctor in a small Southern town who begins to believe that one of the babies he brought into the world-- a baby now grown into a mysterious man named John Kane (Sidney Poitier)-- may be some angel-like being sent to judge humanity.  Another outstanding perf comes from Beverly Todd as John's sometime girlfriend Louisa, who's drawn to Kane once more when he comes to town for his sister's funeral.  Her role fairly begs for a chorus of "I don't know how to love him" but remains grounded nonetheless.  In contrast to their work, I found Poitier's performance to be overly stoic and unaffecting.  Clearly he was trying to portray a being who may or may not be a cosmic judge sent to bring about the Last Days, but he never quite succeeded at producing either cosmic calm or judgmental wrath.

John Kane never does any miracles as such that would prove that he is an angel, or the Messiah, or for that matter a judge from an interstellar tribunal.  According to what Doc Thomas and his doubting-Thomas son Lloyd can learn, he seems to wandered the world (an activity to which the Biblical Cain was given, to say nothing of Jesus of Nazareth) in such a way that borders mean nothing to him.  Yet he's not wealthy, claiming only that when he needed money, he worked.  He blows into town only when one of his relatives dies.  But when he does so this time, the town's experiencing civil unrest due to racial issues between the black and white communities-- issues which are fairly vague and seem poised only to reinforce man's inhumanity to man.  It's signifcant that when Kane does use force-- an efficent, non-showy karate fighting-style-- he does so in an egalitarian manner, taking on both a redneck sheriff and a bunch of local black rowdies.

Only at the end does Kane seem to confirm Doc Thomas' suspicions in a purely "hypothetical" conversation.  Nevertheless, the conversation, like Kane's near-untouchability, slants the ambiguity in the direction of the purely marvelous, as I've explained with regard to various CHRISTMAS CAROL films in this post.  The audience may not know what Kane is or what he's doing, but he's far more than just a guy who liked to travel a lot.

Director James Goldstone (best known for helming the first Kirk episode of STAR TREK) shows a great deal of strength with the actors, but the script by Ernest Kinoy is simply too vaporous. Interestingly, both men worked on the short-lived 1970s teleseries THE SENATOR just prior to collaborating on BROTHER JOHN, but not on the same episode.

Posted by Gene Phillips at 2:47 PM
Email ThisBlogThis!Share to TwitterShare to FacebookShare to Pinterest
Labels: the marvelous