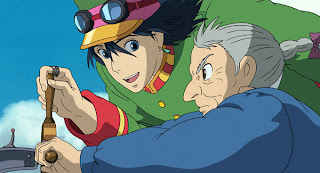 Before watching the well-regarded anime movie HOWL'S MISSING CASTLE (English version only), I decided to first read its source, Diana Wynne Jones' young adult novel of the same name.  I thought the book was very inventive but had too many subplots distracting from the central conflict: the relationships between protagonist Sophie Hatter, a young woman cursed into old age, Howl, the eccentric wizard of the title, and Howl's attendants Calcifer (a fire demon) and Michael (a young helper).

Happily, the feature film, adapted and directed by Hayao Miyazaki, eliminates most of the supernumerary subplots.  On the other hand, Miyzzaki adds in their place some of his favorite tropes, especially his beloved Victorian cultural motifs and his anti-war sentiments.  Neither of these harm the film thematically, though they do take the film's emphasis off the characters and place it more upon the very involved plot.

However, Miyazaki's handling of the characters as such is a mixed bag. Sophie is largely in tune with her prose counterpart, who lives her life so quietly that she seems afraid of her own youth, and who partly embraces the curse of old age as an escape.  However, in the novel Howl is a more comic figure, an egotistical wizard who constantly romances young women and then flees any commitments with them.  Miyazaki makes Howl much more of a standard Japanese "charmer," in essence what Jung might call the male *animus* who awakens Sophie's buried femininity.  Because this Howl is a more "serious" figure, the screenplay wobbles badly on those few occasions when Miyazaki does include some of the novel's comic escapades, or accuses Howl of the "cowardice" seen in the novel.  In addition, Miyazaki adds to Howl's persona a curse involving his transformation into a bird-man, which feels suspiciously like the director's handling of his dragon-man character Haku in his earlier anime-film SPIRITED AWAY.

Still, there's never a lack of movement in this CASTLE, and Miyazaki puts forth a fascinating visual conceit in having "Old Sophie" briefly transform into younger versions of herself during her adventure, as her affection for Howl and her passion to prevent wartime suffering cause the old-age curse to recede.  As noted above I only watched the American version, but found the voice-work above average, even (to name an actor I usually can't stand) Billy Crystal as the fire demon Calcifer.
Posted by Gene Phillips at 3:08 PM
Email ThisBlogThis!Share to TwitterShare to FacebookShare to Pinterest
Labels: the marvelous