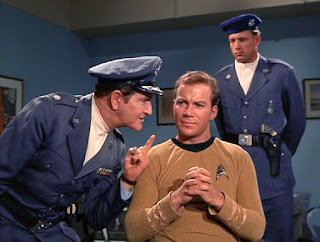 "Tomorrow is Yesterday" falls into a category of TREK narratives that might be called "the unwelcome guest." Usually the guest is an entity with phenomenal powers that pose a danger to the ship's crew, like Charlie Evans or Nomad of "The Changeling." "Tomorrow is Yesterday" isn't one of the first season's more compelling episodes, but it does put Kirk into the ethical position of being the one responsible for disrupting an ordinary man's life.

Kirk and his crew are innocent of any intentional wrongdoing. In a scenario that may owe something to the conclusion of "The Naked Time," a cosmic accident slingshots the Enterprise back in time. As the ship attempts to navigate the skies above mid-1960s America, it's taken as a UFO and pursued by an Air Force jet in attack mode. Faced with the pilot's aggressive stance, Kirk is forced to transport the pilot aboard the Enterprise. This humanitarian act sets Kirk up for the first of his many violations of the Prime Directive: he cannot allow Air Force Captain John Christopher (interesting initials, there) to return to his people after having seen the wonders of the future.

In order to keep up the viewers' sympathy for the heroes, their meddling in Christopher's life is downplayed in favor of the space-sailors seeking to erase the records of their presence. This leads to the episode's best scene-- a captured Kirk being grilled by Air Force officers-- but the sequence also points up one of the production's most glaring faults: that the viewer never sees more than about a half dozen persons manning the Air Force base.

At the eleventh hour Kirk and Co find a solution to their dilemna, so that Christopher and a second officer can be returned to their time-stream without ill effects, and the Enterprise can do the same. Given that the heroes have had almost no practical experience with time-travel up to this point, the solution may strike some viewers as a little too pat. 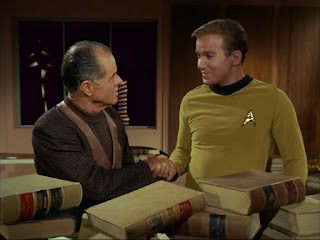 "Court Martial" is more of an intellectual thriller for the majority of its running time, though it does conclude with one of Kirk's more athletic hand-to-hand fights of the season.

The conflict concerns a matter of military protocol: did Kirk accidentally send a subordinate to his death by virtue of a premature action? As with the setup for THE GALILEO SEVEN, the viewer has to take the episode's depiction of Federation military procedures on faith, for as I re-watched the episode, I could glean no good reason why the Enterprise would be eject a manned research pod-ship during the violence of an "ion storm." But the computers assert that Kirk took this action too soon, causing the death of Lt. Commander Ben Finney. Things look particularly bad for Kirk because Finney, formerly a good friend to Kirk from their Academy days, conceived a grudge against Kirk for having done his duty and cost Finney a promotion.

While "Arena" portrayed a situation in which the Federation might have been in the wrong by virtue of a mishap, "Court Martial" has the distinction of being the first to show the military hierarchy as something less than ideal. Initially Kirk's superior Commodore Stone wants Kirk to step down and accept desk duty rather than further tarnishing the service. Kirk demands a full court martial-- only to find that the odds are against him, when the computer record shows him to be derelict.

Kirk's big fight-scene may serve as compensation for the fact that he's basically helpless for most of the story (not to mention that he's also prosecuted by one of his old lovers-- darn that female liberation thing!). His attorney Samuel Cogley-- Elisha Cook in a finely textured performance-- talks a good game, but he actually can't do anything to exonerate Kirk until Mister Spock manages to throw doubt on the veracity of the computer. Cogley has a strong scene arguing for the validation of human beings over the machines they make. This somewhat Luddite rant stands as the first time a TREK episode actively critiques TREK's hyper-technological paradise. generally portrayed as Roddenberry's solution to modern difficulties. Prior to this, most criticisms came from persons of dubious morality, such as Anton Karidian, or from persons who were just being cranky, like "country doctor" McCoy.

Posted by Gene Phillips at 1:55 PM
Email ThisBlogThis!Share to TwitterShare to FacebookShare to Pinterest
Labels: combative dramas, the marvelous