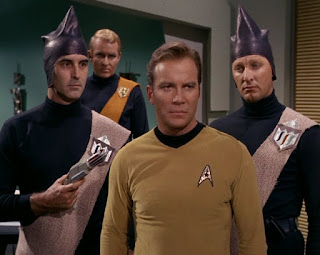 After the mythic depths of "Space Seed," the next three first-season episodes are merely good, albeit in a slightly workmanlike way.

It could be said that on some level "Return of the Archons" was about the Federation trying to gain a toehold on a planet where one of its ships went down, as if the ship gave the Federation some sort of metaphysical claim upon that world. "A Taste for Armageddon"-- an ironic title, since the story's point is that none of the principals possess any such taste-- seems even more aggressive than "Archons," almost on the level of "gunboat diplomacy."

The Enterprise has been charged with establishing diplomatic relations with the planet Eminiar Seven, and to this end Kirk must escort a diplomat named Fox, who has authority to overrule the captain's decisions. To the script's credit, there's no pretense that the Federation is doing this for any idealistic motives; they want the treaty with Eminiar so as to facilitate the Federation's economic expansion.

Unfortunately for Kirk and company, when they send a landing party to the planet-- despite having been given explicit warnings not to venture near-- they learn that Eminiar has for centuries been fighting a "virtual war" with their planetary neighbor Vendikar. No actual fighting takes place, for the two planets have agreed to send a computer-calculated number of "victims" to disintegration booths. Thus the wars can go on, killing citizens but keeping the infrastructure intact. The parallels to the then-current Vietnam War have been put forth by many critics and thus need no further comment.

Whereas in "Space Seed" Khan was the barbarian and Kirk the scion of advanced civilization, "Armageddon" reverses the equation. When Kirk and company are informed that their whole crew has been pronounced "war casualties" by the computers, they refuse to play along, diplomatic mission or no. Three or four times the head councilman calls Kirk a "barbarian," and Kirk clearly relishes this role, deeming that the two planets have become overly complacent about the horrors of war. The episode is somewhat hurt by many pontificating speeches, and the concluding one is conceptually weak, particularly with respect to Kirk's banal line: "We can admit that we're killers, but we're not going to kill today."

The continual banter between Kirk and Spock keeps up interest, although the episode's tacky sets and costumes may make some viewers think of old SF-serials like FLASH GORDON and BUCK ROGERS. As a minor touch, the landing-party includes Yeoman Tamura, who seems to be the first Asian female to have any lines in an episode. She gets one nice visual moment, when Kirk tells her to stand guard over the taller Caucasian character Mea. Tamura's no-nonsense stance makes it clear that she's more than ready to handle the other woman if necessary-- one of the few times a female crewperson demonstrated physical competence. 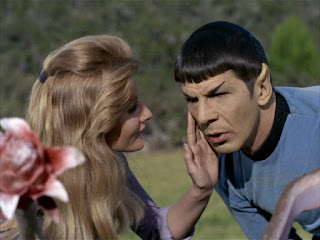 "This Side of Paradise" is a stronger episode, both in terms of being a character-piece and providing an intriguing mystery. How did the agricultural colony on Omicron Ceta III manage to survive, after Federation resources (computers? survey ships?) discovered that the whole planet had been bathed in deadly space radiation? Kirk, Spock and McCoy are the principal investigators, trying to figure out how the colonists can not only still be alive, but far healthier than they were when they came to the planet. While none of the female crewpersons has any significant role here-- even Uhura contributes only a few lines-- the Y-chromosome contingent is well represented by Leila, a botanist who knew Spock during his Earth sojourn. Leila admits to another character that she fell in love with Spock, but that his Vulcan nature caused him to withhold any reciprocal feelings.

The military discipline of the entire crew is gradually demolished as they are covertly exposed to a unique species of space-born flowers. When the flowers spray their spores into the faces of human beings, the humans become docile and contented, uninterested in progress. Spock is one of the more remarkable converts, since in the thrall of the spores he casts all logic aside and passionately courts Leila-- which, clearly, is something he would have done earlier, had he been governed by his human half. (One is never nearly as sure about Nurse Chapel's charms, and maybe the producers weren't either, since she only made one other appearance in Season One.)

Thanks to this quiet, almost hippie-like revolution, the entire crew succumbs to this bucolic paradise, and even Kirk nearly gives in. He discovers that only strong emotions can dispel the spores' influence, so he chooses to de-program Spock by playing upon the Vulcan's memories of being a racial outcast from both sides of his parentage. Kirk has used something like this tactic before in "What Are Little Girls Made Of?" Yet it might be argued that Kirk goes a  bit over the line, particularly in implying that Vulcans ought not to have congress with humans, which is clearly derived from prohibitions against relations between whites and non-whites. Still, as uncomfortable as the scene is, it's preferable to all the self-congratulatory maunderings about racial topics in the later TREK franchises. The "flower power" invasion is destroyed by human crankiness and competition, and Kirk makes closing remarks about the importance of human beings learning to escape the  blandishments of paradise. 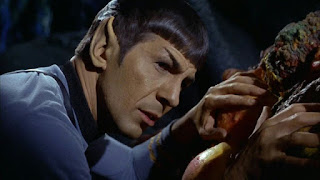 "Devil in the Dark" has long been a favorite TREK episode for many afficianados. I find it diverting, and I give its mythicity a "good" rating thanks to the thoroughness of its cosmological myth: that of extrapolating the nature of a silicon-based life-form. However, though the Horta is one of the best aliens on the series, the episode is little more than a standard monster-hunt, even if the monster is spared the final thrust at the end.

In another of the Enterprise's "interstellar cop" assignments, Kirk and his crewmen must descend into the tunnels of the mining-colony Janus VI. (The name of the two-faced Roman deity is nicely evoked, given that the revolting face of the monster conceals another "side," that of an intelligent creature of a different species.) The monster has slain several miners in the past few months, and the situation immediately establishes a mystery, given that the colony has been present on the planet for several years previous. No one but Spock tips to the significance that the murders began after the miners broke into a particular chamber-- one that will later be revealed as the silicon-creature's egg-chamber. Spock also suspects that the many "silicon nodules" lying around the tunnels are actually the creature's eggs. And yet, despite his being the ship's science officer, he doesn't test his hypothesis by beaming up to the ship to analyze one of the nodules, and he conceals his theory from Kirk and McCoy for no good reason except that the script-writer needs to keep the "Big Reveal" secret.

Still, of these three episodes, this one has the best share of clever interpersonal exchanges, including the immortal classic, "I'm a doctor-- not a bricklayer!"

Posted by Gene Phillips at 2:16 PM
Email ThisBlogThis!Share to TwitterShare to FacebookShare to Pinterest
Labels: combative dramas, the marvelous