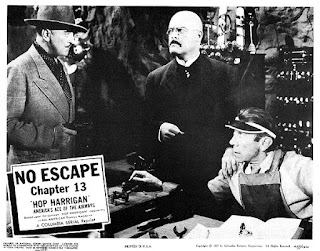 I've already alluded in this review to my theory about the reasons why a couple of third-tier comics properties, THE VIGILANTE and HOP HARRIGAN, made it into serial form before the first-tier SUPERMAN showed up on silver screens.

Of these two third-tier products, HOP HARRIGAN is marginally better than THE VIGILANTE, which as I said suffers from a dull crime-solving mystery. To be sure, the heroes of HARRIGAN also engage in a lot of pointless running around, as the daredevil pilot and his heavyset sidekick seek to stop a deadly device from falling into the hands of a mystery villain. However, though HARRIGAN does not re-invent any wheels, at least this common serial trope-- keep the super-weapon out of enemy hands-- has a basic sociological persuasiveness to it.

William Bakewell plays pilot Hop Harrigan with a kind of bemused attitude, so that on those occasions when he gets into a fistfight or gunfight, he seems less than heroically equipped for the job. The aforementioned comic relief guy is no better or worse than many of his kind, but Harrigan does get some decent support from an aviation-minded kid-character who supplies some of the serial's best acting. Also noteworthy is John Merton playing a demented scientist who may be able to unleash a weapon capable of destroying the world, unless the henchmen of the unseen "Chief Pilot" get it from him first.

The action scenes are occasionally engaging, but there aren't enough of them, and the Chief Pilot stands as one of the lamest mystery villains in serials, given that he's never seen as anything but a shadowed figure.
Posted by Gene Phillips at 3:47 PM
Email ThisBlogThis!Share to TwitterShare to FacebookShare to Pinterest
Labels: combative adventures, the marvelous