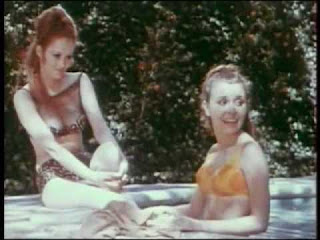 
In my review of Larry Buchanan's CREATURE OF DESTRUCTION I wrote:

CREATURE OF DESTRUCTION is the closest its director Larry Buchanan ever came to directing a decent fantasy-film script-- but that's because said script, credited to one Enrique Touceda, is simply a reshuffling of Lou Rusoff's script for THE SHE CREATURE.

That statement implies that I don't think too highly of either the original scripts on which Buchanan worked, like CURSE OF THE SWAMP CREATURE , or the scripts derived from earlier films. YEAR 2889, though it sports the title of a story credited to Jules Verne, is an unalloyed remake of Roger Corman's 1955 atomic-war flick THE DAY THE WORLD ENDED.

I haven't re-screened the Corman flick in some time. I recall finding it serviceable but far from exceptional in its picture of a small group of post-atomic refugees, holed up in a small country house and endeavoring not to kill one another while avoiding threats like fallout-clouds and mutated humans. But even without re-visiting the 1955 film, I'd say that Buchanan at least does the original no damage, in contrast to his fumbled remake of SHE CREATURE.

The gist of Corman's original scenario, also written by the aforementioned Lou Rusoff, is fairly simple. Because the small group of nuclear survivors has no idea what has happened to the rest of humanity, they must consider the possibility of re-populating the Earth. This may sounds a bit like the situation of Lot and his daughters following the destruction of Sodom. Naturally, the 1955 film is careful to set things up so that its patriarch-figure intends to marry his daughter off to a young man on whom Daddy's set his seal of approval. The young man never arrives at the country house, at least not at the outset of the story. However, other refugees do, setting up an atmosphere of competition for access to the fertile female.

According to online sources YEAR follows the DAY script beat-for-beat, but in place of the histrionics Corman generally favored, almost all of Buchanan's actors render their lines with a sort of mind-numbing lack of affect, much as the cast of CREATURE did. The one pleasing exception is actor Paul Petersen, fresh from the termination of the DONNA REED SHOW. Petersen brings a strong sense of conviction to his simple role and easily steals every scene he's in.

Even though the DAY script is not one of the best Corman ever worked on, it's lively enough that even the somnambulistic acting-style favored by Buchanan can't eradicate the story's appeals to good old sex-and-violence. The design for the "mutant man" of Buchanan's remake is far inferior to the famed Paul Blaisdell version, but Buchanan does manage to get across some of the tension involving the impending rain: whether it will be a contaminated downpour that wipes out the remaining survivors, or will provide the coming generation with their liberation from the folly of their predecessors,
Posted by Gene Phillips at 2:49 PM
Email ThisBlogThis!Share to TwitterShare to FacebookShare to Pinterest
Labels: the marvelous