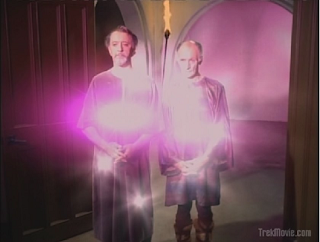 
"Errand of Mercy" isn't one of the great TREK episodes, but it assumes a pivotal role in the mythos for having introduced the villains Trekkers loved to hate, the Klingons.

The episode opens with the Enterprise crew receiving the news that negotiations between the Federation and the Klingon Empire have broken down. The ship is ordered to proceed to Organia, a planet inhabited by a simple, mild-mannered people, one which happens to be in the middle of a disputed area. When Kirk receives further news, that outright war has been declared between the two space-faring cultures, the captain compares Organia to "Armenia" and "Belgium," small, inoffensive countries that simply got caught between warring nations.

A space-battle between the ship and a Klingon vessel ensues, and the Enterprise destroys the enemy ship. This proves to be a far-sighted touch on the part of scripter Gene Coon, for, short as it is, the altercation keeps the audience's focused on the same "us-vs-them" paradigm that Kirk and his people believe inevitable. Once the ship reaches Organia, Kirk and Spock beam down. Their misison is to appeal to the locals, to prevent the Klingons from using the planet as a base (and, perhaps implicitly, to allow the Federation that privilege). However, as soon as the two of them have descended, a Klingon fleet draws near the planet, and the Enterprise is forced to withdraw, stranding Kirk and Spock.

The utterly pacific Organians will do nothing to help or hinder either space-empire, and Spock's scientific analysis judges that everything on the planet has been stagnant for centuries. Coon's script thus leads the audience to think they're going to see another condemnation of unchanging societies, such as "The Return of the Archons." Kirk duly lectures the Organians about all the improvements that the Federation can bring to Organia, sounding for all the world like a pitch-man for the Peace Corps.

The Klingon fleet deposits a military detachment onto Organian soil, and its commander Kor loses no time in demanding total submission, threatening to retaliate with brutal force against any insurgency. The Klingons' garb and appearance remain one of the show's best alien designs, suggesting, albeit indirectly, the look of the Mongol Hordes. Kirk and Spock attempt to masquerade as, respectively, a native Organian and a Vulcan trader, but in due time the two of them seek to undermine the Klingon mission with acts of sabotage.

Near the conclusion, Kirk and Spock have squared off with Kor, while the fleets of the two empires square off in space. Then comes one of the series' better Big Reveals: the Organians are not helpless victims, but hyper-advanced, non-corporeal beings. Such are their phenomenal powers that they are able to force both empires to sign a peace treaty. It's a great example of TREK's ability to "have its cake and toss it away too," for on one hand, Kirk has expoused all of the values of Johnsonian democracy, without any real contradiction of those values, yet on the other, the hyper-advancement of the aliens makes the ideologies of both sides seem like the squabbles of children. 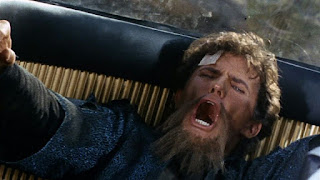 "The Alternative Factor" earns its "fair" mythicity rating only for having been adventurous enough to pose metaphysical questions within TREK's SF-universe. However, it's a rambling, often confusing story, an attempt to frame such questions within the limiting context of a "Moby Dick" scenario.

The Enterprise is once more performing one of its simple exploratory missions: to make a cartographic map of an uninhabited Earth-like planet. While the ship orbits the planet, the ship undergoes a massive spatial cataclysm. After the disturbance subsides, Spock tells Kirk that it seems that the entire universe has "winked out" for a moment, and input from other Federation sources confirms this supposition. In addition, Spock declares that a single humanoid form has now appeared upon the formerly empty planet.

The humanoid, who gives his name as Lazarus, spins a vague story about pursuing a "monster" who is out to destroy the universe. In due time Lazarus's story is proven untrue, but the real tale is never too clear. All that emerges is that the "monster" seems to hail from an anti-matter universe, where he is the lookalike counterpart of Lazarus, Lazarus tells Kirk that he needs the Enterprise's dilithium crystals to recharge his ship and continue the fight, and when Kirk refuses, the obsessed scientist steals them.

The main factor of "Factor" is that, like "Enemy Within," it depends on the good guys trying to suss out the nature of two identical individuals. However, while the conflict of Good Kirk and Bad Kirk is easy to comprehend, one never really knows which Lazarus is Ahab and which is the White Whale-- and even the threat to the universe isn't overly compelling. Moreover, while I can blink at an alien's use of the name Lazarus, with its particularized cultural baggage, I don't get the sense that the writer had any well-defined goal for using the name.  A myth-analyst might venture that the Biblical Lazarus is a "double" of Jesus, since both rise from the dead-- but the two "Lazari" have no other significant Biblical associations. At most, the status of the two at the episode's conclusion-- the two mortal enemies, locked in combat for all time in order to keep the universes separate-- bears some resemblance between the Egyptian conflict of Horus and Set. But on the whole "Factor" seems like little beyond an excuse for lots of fights and histrionics.
Posted by Gene Phillips at 2:58 PM
Email ThisBlogThis!Share to TwitterShare to FacebookShare to Pinterest
Labels: combative dramas, the marvelous