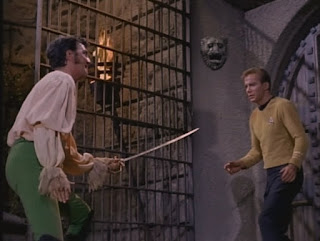 
"Squire of Gothos" is the first episode to which I assign a "poor" level of mythicity. It's a competently made thriller, but it doesn't have any purpose beyond putting the Enterprise crew through its paces. In this story the crew meets its third "irresponsible god,"but whereas Gary Mitchell and Charlie Evans served to illustrate interesting metaphysical and sociological myths, Trelane is just the menace-of-the-week, redeemed only by actor William Campbell's bravura performance.

Trelane, it will be revealed, is an alien who has patterned his world and his appearance after that of late 18th-century Europe, to judge from some of his references. He does so because he's observed Earth from afar, but due to the discrepancies between time-frames, he believes that he's seen present-day Earth, rather than that of Kirk's 23rd century milieu. This lack of perspicacity may have been intended to hint at the "Big Reveal" of the episode, that Trelane is a child of his species, playing with a less advanced species as a human child would demolish an ant hill.

Trelane does apparently assume that his visitors will be Americans, for though he projects the persona of a foppish European aristocrat, he introduces himself as "General Trelane, retired," which may mean that he thinks he's acting the part of a colonial American. There are scattered references in the script to Trelane embodying aristocratic attitudes that the 23rd century has happily set aside, but writer Paul Schneider, who produced a sterling episode in "Balance of Terror," did not sustain the critique in any meaningful way. Trelane also has a short sequence in which he forces his attentions upon a female yeoman, albeit only  by obliging her to dance with her. This "damsel in distress" trope was so common in TREK that it's hard to say if it meant something to Roddenberry personally, or if it was simply a standard device for increasing tension. 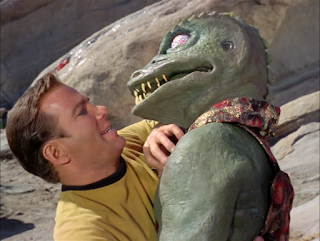 By all accounts, Gene Coon wrote his original treatment for the show's eighteenth episode before someone pointed out that its theme of champion warfare-- that is, pitting the representatives of two warring forces against one another-- bore a strong resemblance to Frederic Brown's short story "Arena." TREK promptly bought the rights to the Brown story, which presumably led Coon to put elements from the prose tale into the finished screenplay.

The 1944 story, summarized here, is very much a product of an American author writing in the shadow of World War II. Earth's champion is pitted against the champion of the alien "Rollers" by a hyper-advanced alien species, and when the Earthman wins, the entire race of the Rollers is expunged. The writers for STAR TREK could never be accused of extreme pacifism, but on the whole Coon's "Arena" takes issue with that "final solution."

The script skillfully puts the audience in the approximate position of the Enterprise crew: as soon as the spacemen learn about an unprovoked attack on an unarmed outpost, a landing-party descends to that planet. Kirk and his crewpeople are immediately assailed by enemy forces, and only manage to return to the ship after losing some of their personnel. The enemy ship flees, and Kirk gives chase. Shatner, incidentally, gives a far better portrait of an obsessed military-man than he ever did in TREK's "Hamlet." The captain is so eager to overtake and battle the enemy that he puts the ship in danger by ordering it to assume excessive warp-speeds.

Then both ships are halted in their flight by the godlike power of the Metrons. These aliens, who may or may not be energy-beings, object to the war having come near their domain. While keeping the ships in stasis, the Metrons transport both Kirk and the commander of the alien enemy, "the Gorn," to the surface of a nearby planet. Kirk and the Gorn must seek to kill one another, knowing that the loser's ship will be destroyed by the Metrons. In addition, the Metrons inform the combatants that they can make weapons with the common substances found on the largely barren planet.

"Like most humans," thinks Kirk, "I seem to have an instinctive revulsion to reptiles. I must fight to remember that this is an intelligent, highly advanced individual, the captain of a starship like myself." The running battle between the captain and the much stronger bipedal reptile Gorn is well choreographed, but it also succeeds in tapping a deeper archetype: an opposition between human and reptile, attested both by archaic myths and by the 20th-century's reconstructions of primitive life. In essence, although the Gorn is seen using tools just as Kirk does, only Kirk has the wit-- and perhaps the sheer desperation-- to suss out the Metrons' clues, By so doing, the captain constructs a primitive gun, and manages to wound his opponent. Thus, even though dinosaurs were long gone by the time prehistoric men rose to prominence, "Arena," like a dozen scientifically incorrect caveman-films, portrays a retroactive triumph of ape-born man over the spawn of the reptile kingdom.

Many of the latter-day TREK epigoni were fond of re-writing pro-war scenarios, emphasizing peace over warfare in all circumstances. Coon's "Arena" certainly does rewrite the bloody-minded conclusion of the Brown story, but it does not do so in a mindlessly knee-jerk manner. It's carefully established that even though the Gorn attacked the Federation, the former may have done so because the latter carelessly trespassed on the Gorn's boundaries. Thus Kirk has good reason to temper his earlier hostility to his reptilian foe, and so earns the Metrons' approbation when he spares the alien captain. Kirk is re-united with his crew for an upbeat conclusion, though one that encapsulates some of the flaws and failings of humanity, rather than simply singing the praises of humanity to an audience of the converted.

Posted by Gene Phillips at 3:41 PM
Email ThisBlogThis!Share to TwitterShare to FacebookShare to Pinterest
Labels: combative dramas, the marvelous