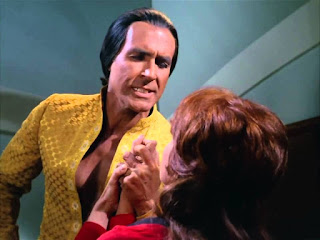 
"Space Seed" is one of the best expressions of Gene Roddenberry's position regarding the "Jekyll-and-Hyde" nature of humankind. Beside its superior mythic concept-- in which Kirk becomes the representative of altruistic civilization, and his adversary Khan the symbol of society's original state of barbarism-- the early episode "The Enemy Within" comes off like a college bullshit session regarding the nature of good and evil.

The script had its origin in a story written by Carey Wilber for an episode of the CAPTAIN VIDEO teleseries. Despite the script's separate origins, though, the story easily coheres with one of the major fears seen on STAR TREK: the fear of taking some menace aboard the Enterprise that will then be infiltrate or assault Federation society, be it the monster of "The Man Trap" or the potential "race of espers" foretold in "Where No Man Has Gone Before." Unlike the espers, however, Khan's breed represents a fear of the past, not of the future.

The Enterprise happens across an apparent derelict ship dating from Earth-civilization in the 1990s; a time of multiple petty national despots and great societal upheavals-- all of which were at some point overcome by Earth uniting in the world government of the Federation. Kirk and his crew are therefore cautious when they realize that the ship, the S.S. Botany Bay, is devoted to keeping a cargo of 84 Earth-people alive in cryonic suspension, although 12 of the 84 have already perished due to equipment malfunction. The use of suspended animation implied that the craft predates the Federation's development of the time-saving "warp drive," though the script does not emphasize the usual scenario: that cryo-sleep was the only method of space-travel for a culture lacking faster-than-light travel.

The question of the Botany Bay's destination is also not addressed in detail: Kirk is more concerned with learning whether or not Khan, the one man who automatically revives from cryo-sleep, is in truth one of the products of the Eugenics Wars, in which scientists sought to breed a race of supermen. The captain consults with one of his officers, historian Marla McGivers, in order to suss out the nature of this reticent relic of the past, but McGivers seems to be overly fascinated with the macho culture Khan represents. In due time Kirk and his officers learn, mostly from computer records, that Khan is indeed a eugenically engineered superman, as well as one of the petty despots of the past.

It's never clear whether Kirk and Spock believe that Federation law has some outstanding legal quarrels with Khan's past reign. One would tend to think that some statute of limitations would have run out hundreds of years down the line, unless one were dealing with Nazi-level atrocities. The latter does not seem to be the case: in one scene Kirk, Scott and McCoy display a sneaking admiration of Khan's past reign, horrifying the prim Mister Spock. Thus it would seem that his offenses are more on the level of any 'strong ruler," rather than falling into the domain of unforgivable war crimes. Nevertheless, Kirk keeps Khan under close watch and declines to revive any more of the supermen.

However, McGivers proves the chink in the Enterprise's armor, having "gone native" in her extreme admiration of the barbaric Khan. Like most barbarians, Khan sees everything in terms of challenge, and so he dominates McGivers, bending her to his will so that she will betray the service and help Khan revive his fellows. Thanks to her betrayal, Khan subdues the ship's crew. He then tries to subdue them to his will, principally by sentencing Captain Kirk to death. McGivers recants at the last possible moment, saving Kirk and making it possible for the captain to triumph over Khan in a direct confrontation between the pure strength of the primitive warrior and the tool-enhanced skill of the modern civilized man. Yet, though Khan is defeated, Kirk gives him his due by giving him and his fellows the chance to do what they do best: taming a primitive world that frustrates the control of modern civilized men.

"Space Seed" is best known for crystallizing the essence of the barbarian ethos, even though many subsequent episodes would find it just as easy to stigmatize that same ethos. At the same time, it does offer an intriguing insight into the makeup of what I will term "the Roddenberry woman." Despite appearing in 1967, Marla McGivers conceptually predates Second Wave feminism. The scene in which she is humbled, when Khan none-too-gently squeezes her hand to make her submit to him, aligns with many similar pre-feminist fictional scenarios, some even composed by female authors like Margaret Mitchell and Ayn Rand. Certainly one will find nothing like the submission-scene in any of the latter-day TREK franchises, all very conscious of their liberal status. Yet it should be noted that although McGivers does give in to Khan and betray her Starfleet trust, she providentially rebels against Khan when she beholds him using his strong-arm tactics on her fellow crew-members. Yet by the episode's conclusion she remains deeply attracted to Khan, and he bears her no ill will for undermining his efforts at conquest. The episode's end strongly implies that they will remain together in their difficult, frontier-like exile. I'm reminded of Jung's contention that women, no matter how feminine they may be in their public personas, always maintain a male "animus" that contains their masculine aspects. Perhaps, rather than seeing McGivers as a traitor to feminism, it would be fairer to see her as a woman who succumbs to an internal weakness at first, but then finds her own strength of character, the strength of what Khan calls "the superior woman."

Posted by Gene Phillips at 2:13 PM
Email ThisBlogThis!Share to TwitterShare to FacebookShare to Pinterest
Labels: combative dramas, the marvelous