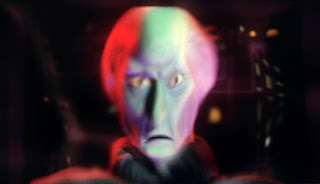 In later years Gene Roddenberry was pleased to claim that he never meant STAR TREK to be any sort of military drama; that he only did so reluctantly due to network demands, and really wanted to have the Enterprise be a vessel devoted primarily to exploration,

THE CORBOMITE MANEUVER, the first regular episode to be filmed following the show's two pilots, would seem to put the lie to that assertion. CORBOMITE is a military drama in every way, though it still keeps the Federation's sociopolitical realities obscure. True, the apparent dilemma of the story is solved with guile rather than with force. Yet the importance of soldierly discipline aboard the Enterprise goes beyond the level of simple survival, as exemplified by THE NAKED TIME.  Discipline is the manifestation of reason, represented as the hallmark of what intelligent species aspire to, as Kirk states to his crewmen:

Those of you who have served for long on this vessel have encountered alien life-forms. You know the greatest danger facing us is... ourselves, and irrational fear of the unknown. There's no such thing as 'the unknown,' only things temporarily hidden, temporarily not understood.


Kirk does not quite advocate the level of emotional suppression favored by his Vulcan science officer, but pure emotion-- represented in the episode by newly assigned navigator Lt. Bailey-- doesn't come off too well here. Doctor McCoy remonstrates with Kirk for having placed such a green officer on bridge duty, and accuses the captain of doing so because he Kirk sees something of himself in the raw young man. Kirk does not deny it, and in effect, Bailey becomes Kirk's negative alter ego, hesitating when the ship is threatened by an alien artifact, or becoming distraught under threat of death from the artifact's owner, the alien ship-commander Balok.  Bailey's dismissal from the bridge for breaking military discipline is much more the core of the drama than Kirk's attempts to out-maneuver Balok. And when Kirk is proven correct-- that "the unknown" is actually knowable-- the script neatly dovetails the plot of Bailey's validation and that of Balok's desire to suss out the representatives of the Federation.

CORBOMITE is also the obverse of the first Shatner pilot, since WHERE NO MAN HAS GONE BEFORE suggests that there may indeed be some unfathomable mysteries in the universe; mysteries that mirror those of the ambivalent human heart. CORBOMITE asserts a much simpler "can-do" philosophy, but arguably one of the strengths of STAR TREK was its ability to alternate between diametrically opposed philosophies, rather than falling into any single dogmatic stance.

There are some decent dramatic exchanges: McCoy quarreling with Kirk, and Spock dryly commenting upon Bailey's emotionality, but nothing goes too much beyond the routine. Spock is also given a peculiar "what-were-they-thinking" line: at a point when the alien Balok is threatening the entire ship with destruction, Spock remarks that Balok reminds him of his father, apparently for no reason but so Scott can shoot back: "Then may Heaven have helped your mother!" Even taking into account the likelihood that in these early days Roddenberry probably had no firm take on Spock's parents, the line proves jarring, as if it exists as no more than a se-up for a lame joke.

Posted by Gene Phillips at 1:34 PM
Email ThisBlogThis!Share to TwitterShare to FacebookShare to Pinterest
Labels: combative dramas, the marvelous