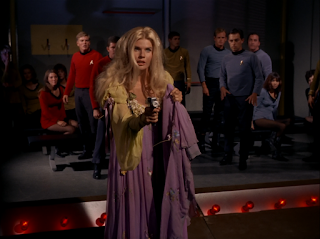 "the man on top walks a lonely street. The chain of command is often a noose." -- Doctor McCoy.


No one can claim that in his salad days Gene Roddenberry didn't exhibit significant ballsiness. "Conscience of the King" doesn't go so far as to adapt the plot of the Shakespeare play from which it takes its title. But given that some critics, notably Harold Bloom, deem HAMLET to be central to all of Western culture, riffing on it for a television space opera was supremely gutsy.

To condense the plot-- SPOILERS for anyone not hep to the mystery's resolution-- the Enterprise is summoned to the oddly named "Planet Q" by Leighton, a food research scientist, who wants Kirk to behold a performance of a troupe of Shakespearean actors. Twenty years ago, both Kirk and Leighton resided (for reasons not cited) upon the planet Tarsus-IV. At that time the governor, later known as "Kodos the Executioner," reacted with extreme measures to a planetary crop-failure: he executed 4,000 citizens in order to keep the rest of the populace fed. Official history claims that Kodos died long ago, but Leighton claims that the troupe's lead actor, Anton Karidian, is actually Kodos. Kirk doesn't initially believe Leighton's wild accusation, though he is more than a little taken with Karidian's beautiful daughter (and fellow performer) Lenore. Then Leighton is found murdered. Kirk immediately wants more time to suss out Karidian, so he arranges to have the acting-troupe transported to its next venue by the Enterprise. He continues to romance Lenore, in part to gain more intel on her father, but he doesn't seek to play upon the conscience of the alleged ex-tyrant. After there are murder-attempts on the last two living people to have seen Kodos in the flesh-- Kirk himself and his subordinate Lt. Riley-- Kirk beards Karidian in his room. Unable to force a confession from the somewhat frazzled old man, Kirk obliges the actor to read a speech given by Kodos during his reign, in order to make a voice-comparison. Lenore remonstrates with Kirk, accusing him, not incorrectly, of having made love to her in order to gain evidence on her father. Kirk's evidence is not decisive, but Lt. Riley, recovering from the attempt on his life, provides the rash action that Kirk never takes. The players then give a performance of HAMLET for the crewmen, with Karidian playing the ghost of Hamlet's father, and Lenore made up to play Ophelia. Riley sneaks into the backstage area, determined to shoot Karidian dead once he hears the actor's voice. Kirk arrives and sends Riley back to sick bay, and he also manages to overhear the solution to the mystery. Lenore reveals to her father that she's the one who's been contriving to kill off all the witnesses who might reveal her father's true identity. Karidian, already tormented by the guilt of his past deeds as Kodos, wails at the discovery that his sins have driven his daughter to both murder and insanity. Kirk starts to take both of them into custody. Lenore seizes a phaser from a crewman, charges onto stage, and shoots a fatal blast at Kirk-- only to kill her father when he leaps in front of the captain. Lenore descends into madness. In the coda, McCoy tells Kirk that Lenore is now under psychiatric care, and remembers nothing about her murderous career.

As should be clear from the summary, Kirk isn't called upon to emulate Hamlet's relentless self-doubting; he only doubts the nature of the evidence. Despite McCoy becoming florid about Kirk carrying out "bloody vengeance," the captain almost never elicits the suffering of innocents as Hamlet does in Shakespeare's play. Lenore is an apparent exception, at least up to the point that the audience believes her to be an innocent who's been hurt by Kirk's quest. However, by the episode's end Kirk is essentially absolved, since it's the crimes of Lenore's father that have turned her into a murderous madwoman.

It's interesting that an episode so replete with Hamlet-references actually starts with a scene from another Bard-play, MACBETH. Karidian, as the titular character, commits the knife-killing of King Duncan on stage, indirectly abetted by Lady Macbeth (played by Lenore). In a sense, no one in the episode never uses either a play, or any other stratagem, to "catch the conscience of the king." But Lenore does make covert use of her theatrical troupe, using its activities to conceal her vendetta against those she perceives as her father's enemies. This bears a nodding similarity to the action of MACBETH, in which the murderer and his wife perpetrate a bloody campaign against many victims in order to secure their reign.

Karidian/Kodos is curiously opaque. The summary of Kodos' career implies that the food shortage may have simply dovetailed with his pre-existing beliefs on eugenics, and in the conviction that certain people were more valuable to society than others. When Karidian allows himself to remember his deeds in full, he calls himself "a soldier in a cause," though he does not expand on his concept of the cause. He's roughly paralleled to Claudius in HAMLET, though his parentage to an "Ophelia"-- one who obligingly goes mad at the finale-- aligns him slightly with Polonius. However, even more than Macbeth, Karidian is most like some of the Bard's "fatal fathers" who bring peril to their daughters, as seen in LEAR, PERICLES, and WINTER'S TALE.

To my recollection, though Shakespeare has a few nasty older female characters, like Lady Macbeth and Tamora of TITUS ANDRONICUS, he has nothing comparable to a young woman who's also a mad killer. However, in HAMLET the protagonist accuses his mother Gertrude of being in some way complicit with his uncle's murder of his father. It might be hazarded that scriptwriter Barry Trivers simply took Gertrude's appearance of complicity, made it literally true, and melded that with the idea of an Ophelia out to protect her sinful father at all costs. The name "Lenore" doesn't appear as such in Shakespeare-- though the Bard did use the name "Eleanor" for a would-be sorceress in one play-- but most Americans would have known the name Lenore from its appearance in various poems by Edgar Allan Poe. There it denotes a deceased woman, so in essence Trivers has reversed the usual powerless connotations of Poe's Lenore figures, and of the general helplessness of many Shakespeare-daughters, by making this one a mad, yet very effecient, serial killer. To be sure, it's not clear what Lenore would have done to get at Kirk and Riley if Kirk hadn't conveniently offered her passage on his ship. Still, one suspects that a "demi-devil" of such deep obsessions would have found some method of bringing down her prey.
Posted by Gene Phillips at 3:02 PM
Email ThisBlogThis!Share to TwitterShare to FacebookShare to Pinterest
Labels: combative dramas, the marvelous