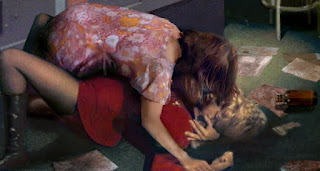 
The objective significance of "Miri" as a script is that it's the first time the show dipped its toe into science fiction's "if this goes on" trope: that is, extrapolating some current trend into some exaggerated form. But, speaking purely from a subjective viewpoint, I find it to be the first falling-off from the high level of the first seven episodes.

In some ways the title of the previous episode would have suited this one better. for "What Are Little Girls Made Of?" is not really about the nature of the feminine. "Miri," however, inverts PETER PAN, J.M. Barrie's story of eternal, blissful boyhood, in order to relate the story of a science-fictional Wendy Darling-- one whose womanhood is awakened not by a boy but by the forbidden fruit of a mature male.

When the Enterprise answers an automated distress call, they find themselves examining an uncharted planet that seems to be morphologically identical to the culture of the United States circa 1960. Rather chauvnistically, Kirk and his landing party (including regulars Spock, McCoy, and Rand) speak of the city they encounter as being characteristic of "Earth of the 20th century." The city, though once a major metropolis, seems to be an uninhabited shambles, destroyed by some great conflict. The crewmen meets a savage, deformed looking man. He assaults them because they've been examining an old tricycle, which he considers his property, but before they can question the man, he dies of a seizure. It's soon revealed that the entire city suffers from a virus; the legacy of the almost vanished civilization-- but the disease only kills the humans living there when they advance to a mature age. This disease becomes the episode's "ticking clock," for the crew of the Enterprise must figure out some way to cure the malady before it kills them.

The only other humans are all teenagers who have supposedly not yet undergone puberty, though many of the actors are a good deal older than the typical "Lost Boys" of Barrie. (For instance, Kim Darby, playing Miri, was about seventeen, while Michael J. Pollard, the leader of the juvenile "onlies," was in his twenties.) In order to stave off the effects of the prevalent disease, the "onlies" have mutated so that their bodies only age one month every hundred years, and they nurture a long-standing grudge against the "grups" (grownups) who caused the devastation. Unike the Lost Boys, though, the onlies can't stave off aging forever; eventually they do age enough to contract the virus and to perish. Yet everything in the onlies' game-oriented culture rejects the adults modes of duty and responsibility. Only Miri, like Wendy Darling, is fully aware that they all will have to grow up someday. Yeoman Rand puts her finger on the cause of her maturation, saying that "[Miri's] becoming a woman" because she's taken with Captain Kirk.

Kirk, naturally, doesn't do anything untoward with the blossoming adolescent: he's just naturally charming to the female gender. Because there's no real romantic arc here, the conflict centers instead upon the doctor's efforts to combat the disease, while the captain struggles to educate the kids in the necessities of adulthood. The episode also features another scene teasing the audience with a Kirk-Rand vibe, and one of the earliest developments of the affectionate quarreling of Spock and McCoy. 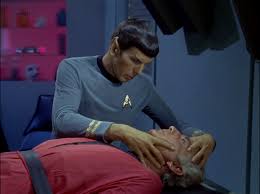 "Dagger of the Mind," despite its Shakespearean reference, is a pretty simple thrill-ride, without much room for philosophical reflection. Kirk and his crew come to the planet Tantalus-5, renowned for its humane treatment of the mentally ill. Naturally, though Kirk initially believes that it's a haven for the unfortunate, the planet's mythological name-- derived from that of the arch-sinner Tantalus, who suffered torments in the Greek underworld-- tells the true tale.

A prisoner named Van Gelder manages to sneak aboard the Enterprise. Since Van Gelder was once a psychologist who worked along Adams, the director of the Tantalus facility, Kirk chooses to investigate how the institution's being run. Against his will the captain's obliged to take with him a certified Starfleet psychologist, Helen Noel.

During the course of the episode the nature of the relationship between Kirk and Helen is murky at best. Helen states that during a Christmas party the two of them danced and Kirk "talked about the stars," but nothing more seems to have happened between them. Yet Helen initially shows signs of wanting some validation from Kirk, and in the episode's most memorable scene, she indulges in some mind-games while testing a supposedly "safe" brain-treatment device on the captain. The episode's greatest weakness, though, is that Adams really has no well defined reason for playing fast and loose with the mental health of his patients. He's little more than a standard mad scientist, while his flunkies seem to have no solid reason for joining him in his criminal endeavors.

On a minor note, this was the first episode in which Spock performed his mind-meld technique.


Posted by Gene Phillips at 3:09 PM
Email ThisBlogThis!Share to TwitterShare to FacebookShare to Pinterest
Labels: combative dramas, the marvelous