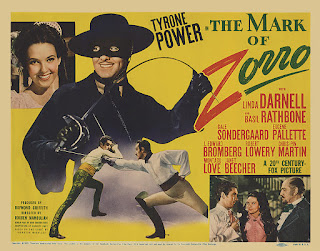 
20th-Century Fox's remake of the 1920 version of THE MARK OF ZORRO stands as one of the great swashbucklers of the Classic Hollywood Era. Yet in some ways it's a little too slick for its own good, and doesn't quite come up to the level of the silent film.

Fox has been called the "Tiffany's of the moviemakers." There's no denying that the 1940 MARK is a sumptuous production, projecting great glamour through its crisp black-and-white photography, and though its assemblage of stars and support cast: Tyrone Power, Linda Darnell, Basil Rathbone, Gale Sondergaard, and Eugene Pallette (more or less repeating his turn as the earthy Friar Tuck from 1939's ADVENTURES OF ROBIN HOOD).

Comparisons between Power and Fairbanks are inevitable. Power was not as much of an athlete as Fairbanks, so Power's Zorro doesn't do a lot of stunt-work, though arguably the staged sword-fights in the 1940 film are better than those of the 1920 outing. But in place of the silent film's intense action, this MARK brings in more melodrama, and Power excels Fairbanks in conveying the shifts of the main character's mood.

The film provides early scenes in which Diego Vega (Power) is shown practicing the arts of war at a Spanish school for caballeros. The young man clearly hopes to distinguish himself in the military, and takes it hard when his father summons him to their home in Spanish California. He even sheathes in his sword in the ceiling, indicating his frustration that he's forced to give up a glorious career to manage an estate in sleepy California.

Frustration gives way to caution when Diego learns that his father has been deposed as the local Alcalde, and both the new Alcalde Quintero (J. Edward Bromberg) and his military aide Pasquale (Rathbone) have taken over the Vega household. Director Rouben Mamoulian may be responsible for the cagey scene in which Diego takes stock of what's happening, and slowly evolves his "scented fop" pose in order to misdirect his family's enemies.

This time, Diego's pose is inspired by a female character who appears nowhere in the novel or the 1920 film: middle-aged Inez, the wife of Quintero (and possibly a covert lover to Pasquale). Her prating about wanting to see the fashions of Spain again apparently gives Diego the idea of playing the fool-- though the young man is somewhat less than pleased to have the older woman pursuing him.

Diego also encounters Lolita (Darnell), his more age-appropriate lady love-- and in this iteration, Diego's beloved is the niece of the corrupt Alcalde: an idea somewhat reminiscent of 1935's CAPTAIN BLOOD. As in most versions, Lolita is immediately attracted to the masked freedom fighter Zorro, but scorns his gutless alter ego Diego.

The melodramatic romance keeps MARK from being as action-oriented as its predecessor, and the theme regarding the "noblesse oblige" of the caballero class doesn't come across as clearly here. However, Rathbone presents a much stronger villain than Noah Berry Sr in the first film, and the soldiers as a whole are much more venal. After Zorro has vanquished all the villains, he again sticks his sword in the ceiling, but now the context is that he has obtained his desired glory and is more than ready to settle down and "raise fat babies." 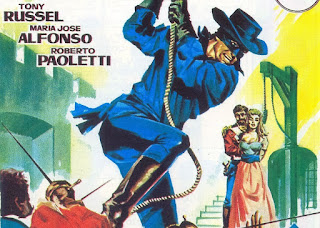 BEHIND THE MASK OF ZORRO is a pleasant Zorro-pastiche. Like many of the Italian adventure-flicks cranked out in the 1960s, this one, directed by Ricardo Blasco, has a stylistic sameness about it, but it does deliver a few strong swordfight-scenes. Tony Russel, an actor of American birth (though he had Italian roots), puts across the requisite charm, and the production manages to work in more lovely ladies than the plot technically needs.

Though the plot follows the broad outlines of the Hollywood Zorro-films, the producers rang in some changes: the hero no longer sports the name Diego Vega, and instead of being a fey caballero, he's an apparently subservient valet who waits on the very people who are plundering California. (Did the producers fear the wrath of Disney, even though the Zorro teleseries had ended six years previous?) In the dubbed version I saw, the film's climax includes one memorable humorous moment: Zorro's assistants dress up like Russians (I forget why) and their spokesman speaks in gibberish that largely consists of Russian proper names piled atop one another.

Posted by Gene Phillips at 2:11 PM
Email ThisBlogThis!Share to TwitterShare to FacebookShare to Pinterest
Labels: combative adventures, outre outfits (u), the uncanny