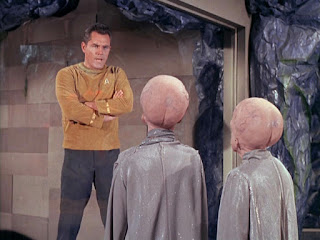 Though "The Menagerie" won a Hugo Award for Best Dramatic Presentation, it's not one of the strongest stories, due to its attempt to meld the original TREK pilot, "The Cage," with a frame-story featuring the current Enterprise cast.

In the frame-story, for reasons unknown Mister Spock programs the ship's computers to take the vessel and its crew to a planet, Talos IV, which has been designated as off-limits to all Federation citizens. The script keeps the mystery behind Spock's actions interesting, though for the seasoned viewer there's never any serious doubt that Spock's motivations will prove both rational and morally uplifting, and that he is in some fashion seeking to help the crippled Captain Pike, Spock's former commander as well as the previous commander of the Enterprise. Prior to the revelation of the true motives, there are some fair dramatic scenes in which Kirk seeks to understand the reticent Vulcan, who insists that both Kirk and Starfleet can only comprehend his actions by watching "broadcasts" from Talos IV that chronicle Pike's previous contact with the natives. (Amusingly, the moment Kirk sees one of the broadcasts, he protests that they're too sophisticated to have been recorded by the Enterprise's usual systems-- a tacit admission that no ship-computers could have been artfully switching between head-shots, altering perspectives, and so on.)

The dramatic meat of the two-part episode, however, must be found in the main conflict of the original pilot, featuring Jeffrey Hunter as Captain Christopher Pike. Roddenberry's concept of Pike seems more emoionally ambivalent than his concept for Kirk. While Kirk is devoted to his captaincy from the first-- his command only mitigated by his heartfelt dedication to his crew-- Pike begins his story by confessing to ship's doctor Boyce that he's considering resigning from the service. Pike seems to desire a life free from his onerous responsibilities. One moment he envisions returning to the bucolic country life of his youth, and the next he fantasizes about setting up shop in the Orion system. For some reason this confession prompts the doctor to mention the infamous "Orion slave girls," though Pike does not expressly claim that he dreams about dealing in slaves. However, a distress signal from an unknown planet-- later labeled as Talos IV-- calls Pike back to the path of duty, Pike, Spock and other crewmen descend to the planet to investigate. Though they encounter a settlement of castaways, it's soon revealed that only one castaway, a young woman named Vina, is a human being; all others are illusions created by the Talosians.

Both the original "Cage" and "Menagerie" play upon a frequently seen SF-trope: that of aliens who treat human beings as pets or specimens. The Talosians also embody a familiar trope: that
of the big-brained humanoids whose adaptation has caused them to become over-dependent upon their cerebral abilities. Pike, kept a prisoner for reasons that are never very well developed, finds that he can block the Talosians mind-reading abilities by concentrating on primal emotions of hate and violence. This would seem to be flipping the formula seen in the second pilot: whereas the emotions of the primal ego undermine the godly pretensions of Gary Mitchell, for Pike they are his sole defense against beings who have become too god-like to battle on equal terms.

The various attempts of the Talosians to experiment on Pike with illusions become somewhat tedious in this two-hour format, with the exception of the now mythic (and politically incorrect) sequence in which castaway Vina merges with Pike's fantasy of a sexually feral Orion slave girl. Here, in contrast to his conversation with Boyce, Pike does imagine himself as a quasi-Oriental lord watching Vina dance for his entertainment. To be sure, one scene, written but not filmed, would have shown Pike play the rescuer by saving Vina from a whipping, which reflects the general American idea of saving primitives from their corrrupt overlords. Yet the scene works better as it stands, for it suggests that there's some strange identity between the enlightened Federation officer and the barbaric slave-lord-- an identity Roddenberry would explore later with the episode MIRROR, MIRROR.

In the end of the original pilot, Pike re-commits to duty over pleasure, yet the frame-story provides a coda to that moral. Because modern-day Pike is hopelessly crippled, Spock has delivered his former commander to the Talosians so that they will give back the illusions he once cherished-- including a reunion with Vina, who in the pilot was revealed to be a near-cripple given the appearance of beauty. While there are various episodes of TREK in which femininity is conceived as a thing of illusion, "the Menagerie" is one of the few in which masculinity proves just as dependent upon the "happy lie."

Posted by Gene Phillips at 2:22 PM
Email ThisBlogThis!Share to TwitterShare to FacebookShare to Pinterest
Labels: combative dramas, the marvelous