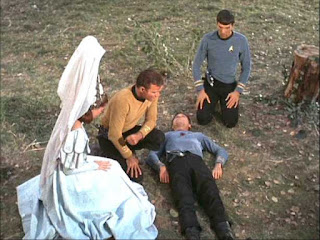 Presumably, after the heavy dramatics of "Conscience of the King" and "Balance of Terror," the producers may have thought TREK's audience for TREK's needed.a vacation from drama. Whatever the particulars of the episode's genesis, "Shore Leave" provides a welcome change.

The Theodore Sturgeon script is a favorite of Trekkers, but I don't find that it rewards a lot of re-viewings. The premise is simple: that an Enterprise landing-party, including Kirk, McCoy, and Sulu, descends to a planet where everything they think about "magically" comes into being. However, in order to keep the story from ending in the first fifteen minutes, no one catches on to this until near the conclusion. It's acceptable at the outset, when Kirk simply thinks Doctor McCoy is hallucinating after the latter sees two characters from "Alice in Wonderland" wandering around the planet's virgin forests. But after a yeoman is attacked by Don Juan after thinking about him, and Sulu finds a service revolver after thinking about one, that should have immediately tipped off Kirk and Co, that their minds were being tapped by alien influences. Hadn't Kirk just given witness to the powers of the big-brained aliens of Talos 4?

Still "Shore Love" is a fun romp, with the added bonus of being shot on location. The Sturgeon script, heavily rewritten by Roddenberry, emphasizes the lighter side of the crew's interpersonal dynamics better than any prior episode-- and so, one might look upon "Shore Leave" as the spiritual ancestor to all later light-hearted entries.

I will say that though it's possible to justify Roddenberry's "a woman's always a woman" philosophy in episodes like "Mudd's Women," I found the character of Yeoman Barrows pretty tedious. Her function in the story comes down to (1) fantasizing about Don Juan, so that she almost gets raped by the rogue, and (2) dreaming of pretty princess garments, which she immediately dons as soon as she sees them. 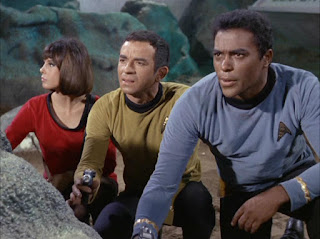 "The Galileo Seven" is the series' first "Spock-centric" story. It follows the pattern seen in "Miri" and "Dagger of the Mind" by separating a small coterie of crew-members from the rest of the ship, but this time Kirk is placed on the sidelines.

The setup for the story also doesn't track particularly well. Kirk's command is compromised by the presence of an officious "high commissioner" who's assigned to supervise the ship's timely delivery of a vaccine to a distant planet. The captain, faced with this evident ticking clock, perversely decides to challenge it when the Enterprise passes by a quasar-like formation. Kirk claims that he has "standing orders" to investigate all such phenomena. Yet it's not clear why he has to send out a shuttlecraft, crewed by Spock, McCoy, and a few one-shot crewpersons, to perform this task. Given everything that has been established about the Enterprise's resources, why would a shuttlecraft be able to discern anything that the ship itself couldn't? Later, when the quasar's radiation deranges all the sensors on the ship and causes the shuttlecraft to crash on an unexplored planet, the script fails to establish that this is an effect that Kirk and his crew failed to anticipate.

Despite these faults, the castaway-peril of Spock and his crewmates is handled with an excellent level of suspense. Unlike the majority of later TREK franchises, Roddenberry's original series constantly shows a strong awareness of the physical limitations on what these space sailors can or can't do. As senior officer Spock assumes the authority for getting the crew back to safety, but his ultra-logical approach to command both provokes the hostility of his human subordinates and results in some serious errors on his part.

In contrast to many of the episodes in which Spock's logic is validated, "Galileo Seven" ends up advocating a more instinctual approach to life's difficulties. Despite the fact that some of the crewpersons have died for dubious reasons, the story ends with a cheery mood, due to Spock's refusal to admit that his vaunted logic has been proven less than an across-the-board solution.
Posted by Gene Phillips at 1:46 PM
Email ThisBlogThis!Share to TwitterShare to FacebookShare to Pinterest
Labels: combative dramas, the marvelous