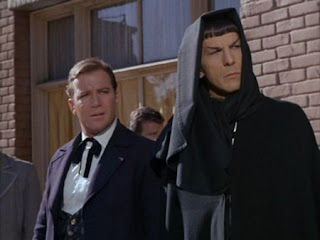 I rated the mythicity of "Squire of Gothos" as poor, but not the episode as a whole. "Return of the Archons" is the first episode I consider to be poor in almost every way. The one exception is that the actors do a professional if undistinguished job with the materials given.

The Enterprise is assigned to investigate the Earth-like world of Beta III, which is also the area where another starship, the Archon, disappeared 100 years ago. (Even given the rationale that Starfleet doesn't have that many ships available-- a datum loosely suggested in "Tomorrow is Yesterday"-- this still seems like a really long time to follow up on such a disappearance.)

At the start of the episode, Kirk has already sent a couple of men, Sulu and O'Neil, down to the planet in native outfits, which look like 19th-century American garments. The investigators fail to learn anything about the lost ship, on top of which the populace becomes roused against them. The ship loses track of O'Neil, and when Sulu is beamed aboard, he has fallen into a state of intense rapture, in which he no longer recognizes his crew-mates and believes himself a member of "the Body," a stock phrase denoting absolute submission to Betan society.

Nothing daunted, Kirk takes Spock, McCoy and a few others down to the planet, again in native garb. After beholding the Betans walking around with largely vacant expressions like Sulu's, the crew-members take refuge in a nearby domicile as a ritual called "the Festival" begins-- a bacchanal in which the citizens lose themselves in an outbreak of sex and violence. Kirk and crew attempt to gather information on the society from some of the less vacant locals, but the inquires are interrupted by a pair of robed citizens called "Lawgivers."

Kirk learns that the frozen state of Betan society has endured for roughly 6000 years, when a ruler named Landru sought to banish political chaos by instituting this repressive regime. Then, one hundred years ago, the Archon visited Beta III, and Landru's machines caused the ship to make planetfall. The script never says what happened to the crew, but one must suppose that some of them survived and perhaps intermarried with the Betans. Some of Kirk's informants are members of an underground movement opposed to Landru-- or more properly, to the computer that has taken the original ruler's place for several centuries (big surprise). Evidently the Archon's crew made some sizable impression upon the Betans, for the rebels now believe in a prophecy that promises a "return of the Archons" who will abolish Landru's rule.

Though earlier episodes suggested a Federation ideal of non-interference, "Archons" is the first time a story invokes a "prime directive." Spock mentions it over halfway through the episode, some time after the Landru-computer has started to bombard the Enterprise with heat rays-- in other words, at a time when the space-sailors have no choice but to defend themselves against the malign mechanism. Kirk rebuts Spock's lukewarm caution by claiming that the prime directive only applies to cultures that are "living and growing." Most TREK episodes did not invoke this dicey sort of reasoning, preferring to utilize the self-defense rationale instead. In any case, though there are a few suspenseful moments-- such as Landru's brainwashing of Doctor McCoy-- Kirk and his crew rather easily overthrow the computer. Kirk's method of so doing-- telling the computer that it's violated its own "prime directive"-- is not well thought out, but looks forward to much better moments of computer-breakdowns in episodes like "The Changeling" and "I, Mudd."

A third justification for the Enterprise's intrusion is, of course, the loss of the Archon crew, but that's not exactly a motive with Rambo-esque emotional appeal, given that all the ship's crew-members are long dead. The word "Archon" means "ruler," though, and so it might be inferred that Gene Roddenberry-- whose story-kernel was expanded by scripter Boris Sobelman-- meant to suggest that Beta III ought to be ruled not by its own corrupt, static system but by the dynamic democratic system represented by the Federation.

The incidents involving "the Festival" are peculiar in that they would seem to contradict the image of Beta III as relentlessly conformist. I believe that Roddenberry wanted to allude to something along the line of the "steam engine" theory of society, which argued that even the most straight-laced society had to "let off steam" through rituals of controlled anarchy. However, the social function of the Festival is dropped early in the narrative, and never raised again. Still, the allusion does cohere with Roddenberry's "Jekyll-and-Hyde" concept of the human spirit, and perhaps this is the reason the computer-villain bears the name as the famed French serial killer Henri Landru, sometimes described as a "20th-century Bluebeard."

Posted by Gene Phillips at 3:35 PM
Email ThisBlogThis!Share to TwitterShare to FacebookShare to Pinterest
Labels: combative dramas, the marvelous