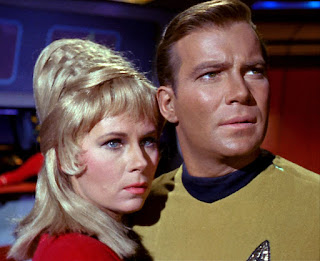 As mentioned earlier, "Balance of Terror," the 15th episode broadcast, is the first time the audience got a substantial look at the sociopolitical setup of the Federation. Significantly, "Terror" begins with Kirk officiating over a wedding between two crew-members, which the captain calls one of his more pleasant duties. However, the wedding is interrupted by a call to arms, emphasizing the fragility of the Federation's peaceful domain.

Spock reveals to Kirk that the ship has received a message that Outpost 4, a planetary station, has been attacked. Further, other outposts in the same area-- "the Neutral Zone"-- have recently gone "silent." Thus Kirk must investigate the possibility that the occupants on the other side of the Zone, the Romulans, have chosen to move aggressively into Federation Space.

The script goes to great pains to spell out the previous history of Federation-Romulan encounters; a history fraught with conflict due to the latter stellar empire seeking conquest after the fashion of Imperial Rome. (The script goes so far as to use Roman terms like "centurion" for certain officers of the Romulan hierarchy.) Indeed, Stiles, a crew-member on the Enterprise, experienced one of the earlier battles when he was a child, and he's clearly aching for a chance to attack the Romulans on the basis of their past, rather than their present, aggressions.  In addition, for reasons that relate to the episode's "Big Reveal" of what the Romulans look like, it's established that no one in the Federation has any idea what their former opponents look like.

The Enterprise is unable to prevent the Romulans' new ship-- armed with a cloaking-device that partly conceals it from Federation sensors-- from destroying Outpost 4. However, the ship is able to follow the ship's progress, resulting in a space-pursuit reminiscent of more than a few submarine-pursuit films. Spock is also able to use his instruments to give the bridge-crew a look at the Romulans on their bridge, and they turn out to be racially related to the Vulcans. Thereafter throughout the episode Crewman Stiles constantly makes suspicious remarks about Spock, as if he were some sort of Fifth-Column agent sent into the crew's midst by his Romulan masters. Though this episode was not the first time TREK touched on the matter of racial tensions in a science-fictional context, "Terror" is the first time this story-element became a vital part of a story's theme.

The other major element of "Terror's" theme is the conflict between Kirk and the unnamed Romulan commander, who never meet one another but who learn to anticipate one another's battle-maneuvers like two master chessmen. The Romulan ship is eventually defeated, but the commander's demise is given a tragic dimension. Much the same applies to the death of Tomlinson, the man who was going to be married that same day. Spock is present during the disaster that takes Tomlinson's life, but the Vulcan is only able to save one of the two crewmen involved-- none other than Stiles, whose bigotry is refuted in a patent object lesson. That said, at no time does Spock show anything but diffidence toward Stiles, even when the latter makes a fumbling attempt at an apology.

The episode's only false note appears during one of the tense bridge-scenes. At a time when the Enterprise seems to be in extreme danger, Yeoman Rand draws near Kirk and the two of them un-self-consciously exchange a light embrace, despite the presence of the rest of the bridge-crew. Given that it had already been established in "Naked Time" that Kirk never meant to act on his hidden impulses, this moment seems an awkward misstep into the realm of sentimentality.

Posted by Gene Phillips at 2:27 PM
Email ThisBlogThis!Share to TwitterShare to FacebookShare to Pinterest
Labels: combative dramas, the marvelous