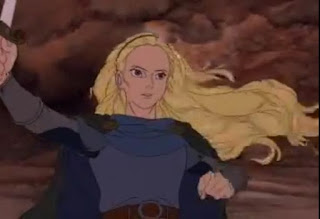 
I reviewed Rankin & Bass's 1977 THE HOBBIT over two years ago, and since this telefilm was written by the same scripter and directed by the same directors, there aren't many differences in the aesthetic approach of the two films. My problems with the character design and the de-emphasis of  violence are similar though not quite identical.

One matter pertains purely to my classification of works in terms of being combative or subcombative. I consider that because both Tolkien's original HOBBIT and his RING trilogy culminate in scenes of sublime violence, both are combative works. However, the former novel is more episodic and juvenile in its focus. This apparently encouraged Rankin & Bass to play down any potential violence in their HOBBIT, so that I deemed it a subcombative film.

This de-emphasis wasn't really feasible when R&B adapted the final third of Tolkien's epic. Even though the film-script omitted assorted conflicts that had been present in the third section, ranging from the near-slaying of Faramir to the somewhat anti-climactic Battle of Bywater, the animators did reproduce the broad outlines of the Orcs' assault on Minas Tirith and the city's rescue by the Rohirrim. Rankin and Bass are clearly not as emotionally invested in these violent conflicts as they are in their many musical interludes, a few of which actually derive from Tolkien. But they produce a credible version of the most outstanding one-on-one fight in the third book: the duel between the female knight Eowyn (seen above) and the Lord of the Nazgul.

The sequences dealing with Sam and Frodo picking their way through Mordor, dodging Orcs and fending off the obsessed Gollum, aren't nearly so successful. Though the animators devote considerable attention to the weariness of the travelers, the "bigfoot" character-design mitigates against any narrative assertions of suffering.

The most important failing of the two Rankin & Bass outings, though, is that they never comprehend the double-sided nature of Tolkien's work. The animators could apparently understand the author's love of simple, homey things, to judge by the general tone of the musical numbers. But grandeur and the sublime conflict of good and evil were utterly beyond them. In the novel, when Frodo is essentially possessed by the evil of the One Ring, Tolkien presents the hobbit's situation as a spiritual struggle. In RETURN OF THE KING, Frodo's lapses into the Dark Side seem more like an inconvenience than anything. Most of the celebrity voice-casting doesn't especially hurt or harm the diegesis, but Roddy MacDowall's dulcet tones are just a little too over-familiar to produce a distinctive Samwise.

Posted by Gene Phillips at 12:31 PM
Email ThisBlogThis!Share to TwitterShare to FacebookShare to Pinterest
Labels: combative adventures, the marvelous