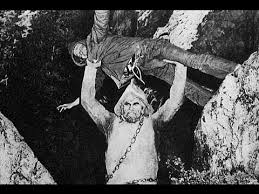 Richard Cunha’s first directorial effort for independent Astor Pictures was GIANT FROM THE UNKNOWN, with a script provided by two writers. The story goes that Astor then wanted another B-film to pair with GIANT. So Cunha concocted SHE DEMONS with the assistant of co-writer H.E. Barrie. To rephrase an old chestnut, this was a case of the mild leading the wild.

GIANT is never a total loss. Cunha had been a cinematographer in the military, and he takes good advantage of the California locations. Still, both the plot and the characters are pretty dull. Viewpoint character Brooks (Ed Kemmer) journeys to a small California town to meet an old colleague, only to find that the colleague and two other residents have been killed, as have a number of cattle. (Despite this allusion to “cattle mutilations,” no one makes any reference to flying saucers or their occupants.) Though he gets some suspicious looks from a local sheriff, Brooks has no plans to play detective, except in the scientific sense. He encounters a respected archaeologist, Doctor Cleveland, and joins the latter’s expedition to look for conquistador artifacts—not least because the doctor’s good-looking daughter Janet is along for the ride. Rounding out the support-cast is an aggrieved local, Indian Joe, who claims that the murderer is an ancient Indian spirit, seeking to avenge the wrongs done to Indians by white men.

Once out in the wilds of California, the threesome go about the business of archaeological exploration, while Cleveland provides needed exposition on the source of the artifacts he seeks: a brigade of conquistadors that disappeared in the area centuries ago. He even has detailed info on their leader, a giant warrior named Vargas. This proves fortunate because Vargas (Buddy Baer) has awakened from a bout of suspended animation, leading him to run around butchering cattle for food,.Conveneitnly, the little expedition unearths the mammoth fellow’s armor, prompting the unspeaking warrior to reclaim it, so that he looks more like a conquistador and less like a cast-member from ONE MILLION B.C.

However, having set up a reasonably interesting scenario, the rest of the film drags along, with a lot of minor action (including more business with the suspicious sheriff) and the offscreen killing of Indian Joe by Vargas, until the climactic slaying of the unknown giant. Personally, I thought the scripters missed a bet by not having Indian Joe befriend Vargas and use him as a pawn to kill white folks, so that he would become an avenging Indian spirit in the metaphorical sense at least. 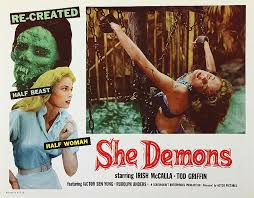 SHE DEMONS, though, proves to be one of the liveliest B-films of the late fifties, starting off with a handful of people being shipwrecked on a South Seas island—two of whom, heroic seaman Fred (Tod Griffin) and spoiled heiress Jerrie (Irish McCalla), are the destined romantic pair of the tale. Jerrie sets the tone for the craziness to come by bitching at Fred for not rescuing more of her precious clothes, including “my powder blue cashmere shortie!” Naturally,all of her upper-crust nastiness merely reflects her desire to wield control over the stalwart seaman—and over time, she becomes more sympathetic as they and their shipmate Sammy (Victor Sen Yung) find that the island is replete with all sorts of menace. Not only are there the demonesses of the title, but also leftover WWII Nazis, a boiling volcano, and U.S. jets that use the island as a bombing-site.

The monstrous maidens—lissome island-women with demon-like faces-- are the first weird thing uncovered by the castaways, but the She Demons are no more the stars of the show than are the beast-men of Wells’ ISLAND OF DOCTOR MOREAU and its cinematic adaptations. This island has its own version of Moreau, Nazi scientist Karl Oster, who spends his exile coming up with weird experiments. Oster has fortified his underground HQ so well that he’s survived several bombing-runs (thus creating, in effect, a South Seas version of the Blitz) and he uses the power of the volcano to create a “perpetual motion machine.”

All thar said, Oster’s only aim—as well as the aim of his three of four fellow ex-Nazis—seems to be that of using island-women as research subjects, so that he can someday restore the good looks of his burn-victim wife Mona. How Oster happened to create the She Demons doesn’t get a lot of explanation. Cunha and Barrie are much more interested in showing that, despite his sentimental feeling for his wife, Oster is still a very Bad Nazi, not least because he starts putting the moves on Jerrie.

Many critics have compared SHE DEMONS to “men’s adventure” magazine-stories, but to me it seems more like a Golden Age comic book, with its cheerful parade of impossible wonders. McCalla, who was playing TV’s “Sheena” during the same period, is much more fun to watch than the She Demons, who don’t even get to do much beyond a short dance and the mauling of their keeper. Cunha and Barrie also collaborated on two more noteworthy B-films, FRANKENSTEIN’S DAUGHTER and MISSILE TO THE MOON.
Posted by Gene Phillips at 1:19 PM
Email ThisBlogThis!Share to TwitterShare to FacebookShare to Pinterest
Labels: the marvelous