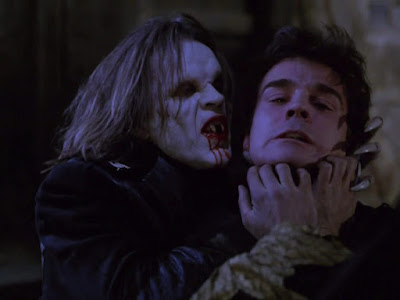 SUBSPECIES is the first of four vampire films with the same cast of characters, as well as one "spin-off" film that takes place in the same "universe." All were written (or co-written) by director Ted Nicolaou, and all were filmed in Romania, which proves to be the best aspect of the series, since Nicolaou takes full advantage of the settings and even the physical attire of the characters to give his films vraisemblance.

I haven't finished re-watching all five films yet, but my memories of previous screenings suggest that these are just lively, atmospheric time-killers. The first sets up the basic characters and their concerns, and then the sequels just repeat the same basic formula; vampires running around fanging people while pursuing an arcane artifact, the Bloodstone. The "subspecies" tag originally refers to little red manikins that the king-vampire Radu creates from his own blood, but they have only minimal impact on the storylines and may have been no more than concessions to one of the film's production companies, Full Moon, which made malevolent manikins one of their signature tropes, a la PUPPET MASTER and DEMONIC TOYS.

Nicolaou's take on vampire mythology, while derivative, is at least somewhat more engrossing than the average low-rent fang-tale. In this world, apparently vampires can breed normally, for SUPSPECIES concerns two half-brothers, begat from a vampire lord from two women, one a vampiric sorceress and the other a mortal. The film starts out with the full vampire Radu (Anders Hove) slaying his father in order to obtain the Bloodstone, a relic able to shed the blood of a saint, and thus empowering any vampire who owns it. (That said, even when he has the Bloodstone in his hands, Radu doesn't seem to hold off on drinking blood from innocent mortals-- though he and his kindred must not have doing much blood-taking, since in modern times, only the older Romanians believe in vampires.) Radu's half-brother Stephan doesn't want the relic, nor does he want anything to do with feeding off people, though it's established that he does have roughly the same vampiric powers as Radu.

Enter two American college students, Lillian and Michelle, who come to a small town in Romania, rooming with Mara, a Romanian college girl whom they met in America. All three are students of Romanian folklore, and when they go nosing around Romanian ruins, they encounter Stephan. Stephan and Michelle fancy each other, and Radu, observing this, decides to use the girls against his hated half-brother. Radu vampirizes first the two "Lucys," Mara and Lillian, and eventually does the same to Michelle, the "Mina" of the story. Stephan attempts to prevent Michelle from being enthralled to his brother by re-biting her and binding her to him. The fraternal conflict comes to a head: Radu and Stephan engage in a long swordfight, after which Stephan beheads Radu, while Michelle overcomes one of her vampirized friends with a canny trick. The swordfight, while not very well choreographed, is the only element that makes SUBSPECIES a combative film, though it's my memory that none of the other related movies qualify for the combative mode.
There's not much psychological depth in this battle for two brothers over one woman, and the film's ending is just a setup for the sequel, which picks up immediately after the events of SUBSPECIES. Aside from the location advantages, the series' main asset is the makeup devised for Radu. With his pale skin, long stringy hair and long clawlike fingers, the evil undead's image certainly owes something to that of silent-film vampire Orlock from 1922's NOSFERATU, and actor Anders Hove gives a spirited performance as the nasty bloodsucker. Had there never been any sequels, I might have found it hard to decide if the narrative centered more upon Radu or upon Stephan and Michelle-- though, since the latter two are fairly bland, I might well have settled on the undead villain, since it's his quest for power that makes the story go. In terms of the series, though, Radu is unquestionably the star, since Stephan is quickly knocked off in the first sequel, Michelle becomes more drawn into Radu's world in all three sequels, and another heroine, Rebecca, is introduced in Part Two to become "the new Mina," so to speak.
Posted by Gene Phillips at 6:16 AM
Email ThisBlogThis!Share to TwitterShare to FacebookShare to Pinterest
Labels: combative dramas, the marvelous