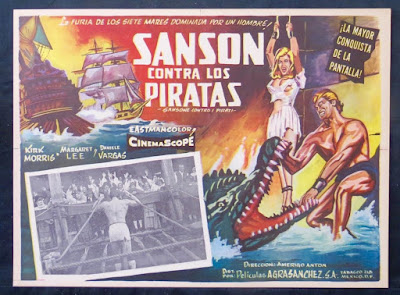 I'm fairly surprised that by all indications this was NOT originally a "Maciste" film in its original form. But as seen above, the Italian title was essentially "Samson against the Pirates." Given the way Maciste got around-- to the courts of the Czar, or to 15th-century Scotland-- why not have him show up in what I assume to be the 17th century, vanquishing pirates? Maybe the producers decided that most Maciste films got turned into Samson or Hercules anyway for the American market, so why not claim that this is Samson doing a Maciste turn?
There's no explanation for the strength of the titular muscleman (Kirk Morris), although one of the villains comments that he must have some supernatural power to be able to toss men around so easily. Samson like most such heroes is not a swordsman, so most of the (rather dull) fight-scenes are just the usual knockabout kind. On the plus side, because the film is trying to suggest the heady adventure of a swashbuckler, SEA BEAST doesn't look as grungy as many muscleman flicks, and the photography is the film's most pleasing aspect, even though most of the action transpires on land.
In addition to Samson's uncanny strength, his chief opponent, the pirate king Murad (Daniele Vargas, playing the only thing close to a "sea beast"), arranges a "diabolical device" to test the hero's power: chaining him to two boats whose rowers try to force their way out to sea-- and if Samson can't counter their pull, he'll be impaled by spears. It's neither the best nor worst of its kind. Cute blonde Margaret Lee provides the movie's only pulchritude.
Posted by Gene Phillips at 3:41 PM
Email ThisBlogThis!Share to TwitterShare to FacebookShare to Pinterest
Labels: combative adventures, diabolical devices (u), superlative skills (u), the uncanny