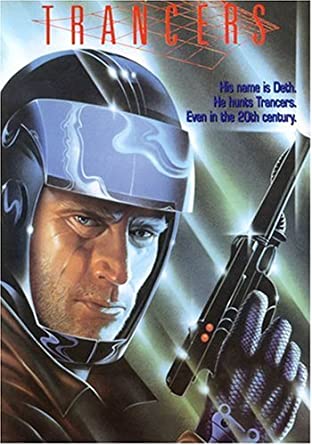 I'm kind of surprised that the above poster pictures the hero with a helmet. I don't believe the main guy Jack Deth (Tim Thomerson) wears such gear in the original film or in any of the five sequels, and neither did Harrison Ford when he played the template for Deth: Rick Deckard in BLADE RUNNER.

One of the first scenes is a pretty fair riff on the "android interview" from BLADE RUNNER. Deth, a retired cop in the 23rd century, attempts to suss out which occupant of a run-down diner (that looks like it belongs in the 1950s) is actually a "Trancer." Deth guesses wrong and gets attacked by the titular creature, a human who instantly mutates into a bloodthirty savage.

After Deth makes short work of the creature, we get the exposition as to how Trancers have been unleashed on the future-world by evil psychic Martin Whistler. It's not clear as to how Whistler was going to gain world dominion by infecting random people with the Trancer condition-- which is limited in that it only works on weak-willed people-- and so the villain is forced to flee the forces of law and order. He does so by using a special chemical that hurls his consciousness back in time, so that he can occupy the body of an ancestor. Deth, who for some reason has a real mad on against Whistler, uses the same technology to zoom back to an ancestor's body in 1984.

Most of the remaining film consists of copious "duck out of water" scenes as Deth tries to accommodate himself to the 1980s. By chance his ancestor happens to have got lucky with a young woman named Leena (Helen Hunt, a few years from mega-stardom), and after the usual misunderstandings, Leena becomes fully enmeshed in Jack Deth's quest. I think something was said about what Whistler meant to do in his new body, but it escapes me at the moment. Clearly the writers, Danny Bilson and Paul De Meo (best known by me for the 1990 FLASH teleseries), knew that the main appeal of the film was letting Tim Thomerson run around beating up people and spouting tough-guy lines, so that's pretty much all there is to TRANCERS. I like Thomerson, but based on the first film I wouldn't have thought it would have spawned a six-flick series.

Posted by Gene Phillips at 3:10 PM
Email ThisBlogThis!Share to TwitterShare to FacebookShare to Pinterest
Labels: combative adventures, the marvelous