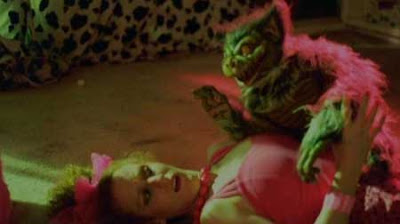 For me the most interesting thing about HOBGOBLINS is my own response to seeing it without the accompaniment of mocking commentary. I think that the first time I viewed the most famous production of writer-director Rick Sloane, I saw the MST3K version. After that viewing, I fully agreed that this was one of the worst films ever made. Then I recently re-watched the film sans commentary. While I still considered HOBGOBLINS to be dull and stupid, it was more amusing without voice-overs analyzing its shortcomings.

Though Sloane's titular faux-Gremlins are technically the stars of the show, the human characters opposing them are just flatly rendered versions of familiar character-types that their nonsensical exploits almost rise to the lunacy of TROLL 2. The "lead male" is ordinary schmuck Kevin. Kevin has a girlfriend, Amy, but she seems perpetually dissatisfied with him, and her pretense of being virtuous suggests that Kevin's not getting any from her. In contrast to these two unfulfilled lovers are their pals sex-crazed Daphne and her soldier-boyfriend Nick, who have no compunctions about jumping into Nick's van to do the deed at any given moment. Even more on the outs than Kevin is literal "fifth wheel" Kyle, who has no girlfriend and whose only erotic stimulation comes from talking to a sex-call operator (played by a sedate older woman). In an early scene Nick challenges Kevin to spar with him, both fencing with garden utensils, and after much poorly choreographed flailing about, Kevin is humiliated in front of his already standoffish girlfriend.

In his attempt to make Amy proud of him, Kevin takes a job at a local movie studio, and inadvertently unleashes a group of scruffy aliens from a vault in which they've been kept prisoner for decades. An elderly studio guard informs Kevin that the Hobgoblins possess the power to make humans see their fantasies come to life, but only so those fantasies can turn around and destroy the fantasizer.

I won't go into the tedious and predictable way Sloan has characters like Daphne and Kyle beleaguered by their fantasies (though, thanks to Kevin, they're saved from being executed by their dreams). Patently, even though Kevin does not importune the Hobgoblins for any wishes, their mere existence serves to fulfill his wishes for greater agency, since he become the de facto hero. Nick tries to act the part of the alpha male and is apparently destroyed, only to be comically resurrected near the conclusion. The most embarrassing fate falls to prudish and hypocritical Amy. The Hobgoblins bring forth her desire to be a Slutty Girl, but instead of having some dream-scenario manifest, Amy seeks out a local dive, "Club Scum," which deserves the honor of "least believable dive ever filmed for a movie." Kevin and his goofball friends rescue Amy amid a lot of incoherent slapstick, and the Hobgoblins are destroyed in an explosion by the old security guard-- leading many to wonder why he didn't do this when he had the creatures confined to the vault. 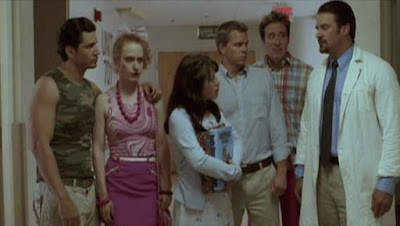 Not long after the first film, HOBGOBLINS 2 picks up with the same characters, necessarily played by a new group of actors, none of whom are any better or worse than the first batch. The five former high-schoolers are now in college, taking some sort of psychology course, though none of them shows the least bit interested in the subject. The requirements of the course lead them to a psychiatric hospital, and they learn that an old acquaintance, the man who owned the movie studio, is now an inmate. In roundabout way the inmate reveals that not all of the Hobgoblins are dead after all. He doesn't explain why the survivors decide to focus all of their attention on the five dorks, but obviously Sloane knew that no one would care if he did.

After the middling success of HOBGOBLINS in the eighties video market, Sloane directed five of the six VICE ACADEMY movies. HOBGOBLINS 2 is closer to the VICE movies in delivering a greater quantity of scattershot dumb jokes, whereas the first film tended to run each of its dumb jokes into the ground via repetition. The concentration on more jokes means that the Hobgoblins don't actually do that much, and surprisingly, Sloane refrains from repeating the trope about Kevin proving himself to Amy. The use of the "nerd makes good" trope didn't exactly make the first film GOOD, but it provided a little continuity for all the chaos.

Most of the humor is relentlessly self-referential and lacking any sense of timing or wit, and once more Sloane keeps his production values as low as they were in the first film. This means, among other things, that the Hobgoblins look as bad in 2009 as they did in 1988, not being for a moment convincing as anything but ratty looking puppets. I'm glad I had the chance to watch them together, just to see how this particular crap-artist attempted to keep some things the same while varying others. But frankly, even the VICE ACADEMY films offered marginally more entertainment value.

Posted by Gene Phillips at 3:27 PM
Email ThisBlogThis!Share to TwitterShare to FacebookShare to Pinterest
Labels: the marvelous