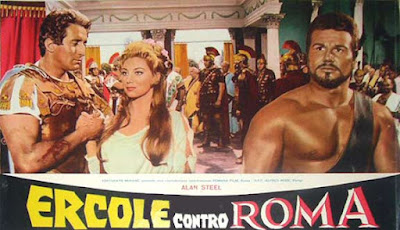 I'm fairly surprised that in HERCULES AGAINST ROME this version of Hercules is NOT one of the many disguises for the popular Italian muscle-hero Maciste. It might have been interesting if he were really the Son of Zeus, making a random appearance amongst mortals long after his purported life in ancient Greece-- specifically, during a late period of Roman rule around the time of Emperior Gordian III (second century AD). But instead, this "Hercules" is just a very strong blacksmith with no supernatural aspects.

That doesn't mean that this version of the famed hero (once again played by Alan Steel) can't kick ass when he pleases. Indeed, Steel is pretty much ROME's only selling-point. No matter how many well armed soldiers attack the hero, all Herc has to do is wade into them with bare fists, and they just go flying. A particularly amusing scene has three or four archers draw a bead on the unshielded hero. He hides behind a wooden goat-fence, tears it up, and throws it at some of the nearby soldiers. Why does this action prevent the archers from still shooting him? Best not to ask.

When Steel is not fighting soldiers, the film bogs down in a tedious palace intrigue plot, as an evildoer (Daniele Vargas) assassinates Gordian III and tries to arrange for a marriage of convenience to a noblewoman named Ulpia (Wandisa Guida). None of the intrigues nor the villain's depredations toward the people, nor a B-plot about Ulpia's love for a common soldier, generate any interest. There's a little dramatic potential in the blacksmith's village, since a comely young woman, the unusually named "Erika," has a thing for the big lunk who still thinks of her as a "little girl." But by the film's end Erika fades from the plot, and there's no telling whether Hercules, riding back to his small village, will ever get with her. Despite three attractive female co-stars, ROME does nothing to take advantage of their charms.

Posted by Gene Phillips at 2:35 PM
Email ThisBlogThis!Share to TwitterShare to FacebookShare to Pinterest
Labels: combative adventures, superlative skills (u), the uncanny