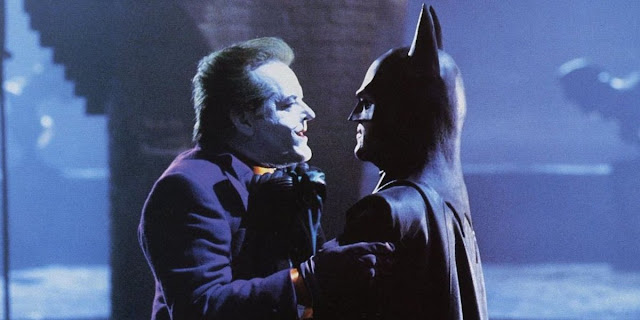 On occasion I've made passing reference to the 1989 BATMAN as the film that paved the way for the mass-market superhero feature film. Before BATMAN '89, related types of "super-adventure" films had scored with both adults and juveniles, but the only costumed hero movies that attempted to reach both audiences were the four live-action SUPERMAN films-- and even there, one wonders if, by the third and fourth entries, the respective producers weren't really counting on kids to be the main audience. Certainly most of the other costumed-crusader flicks were resolutely aimed at juveniles, particularly those that debuted around the same time as BATMAN '89, such as 1987's MASTERS OF THE UNIVERSE and 1990's CAPTAIN AMERICA.

I would not be surprised to learn that most or all of the personnel who made the breakthrough possible-- director Tim Burton, composter Danny Elfman, and the many contributing writers (both credited and otherwise)-- had no ambition beyond furthering their own careers with a successful big-budget movie. But they were able to make a difference precisely because they pursued their ambitions by diverging from the most prominent Bat-adaptation; that of the 1966-68 BATMAN teleseries.

Clearly the raconteurs took some inspiration from Frank Miller's celebrated 1986 graphic novel THE DARK KNIGHT RETURNS. I don't mean to suggest that the filmmakers had any strong regard for the history of Batman specifically or comic books generally: I just mean that they realized that TDKR had enjoyed substantial sales, so that, even though the story for BATMAN '89 borrowed nothing from TDKR than a few minor tropes, the filmmakers realized that a comic-book Batman with greater levels of violence and sex might also translate to success on the big screen.

Certainly Tim Burton's Gotham City is far from the sunny streets of the 1966 Bat-series. Criminal gangs dominate the city and keep most of the cops in their pocket. The foremost gangsters are represented by gang-boss Carl Grissom (Jack Palance) and his enforcer Jack Napier (Jack Nicholson), and their relationship is less than loyal, since Napier is sleeping with his boss's girlfriend. Moral men like Commissioner Gordon and D.A. Harvey Dent are clearly in short supply. Since the gangs play keeps with one another, a costumed crimefighter has to rise to the same level, and thus the Batman (Michael Keaton) who first appears in this Gotham is the same as the one from the earliest comic books: a grim, enigmatic figure capable of sometimes dishing out fatal quantities of violence. BATMAN '89 is careful not to harp on the hero's potential for killing his enemies, which might have alienated the audience. But when the hero causes a murderous hood to fall to his death or blows up a building full of equally ruthless henchmen, no one in the audience blinks any more than they would at witnessing James Bond blow away some enemy agent.

Despite the increase in the Caped Crusader's violence quotient, he's essentially innocent of creating his far more murderous nemesis by changing the hard-bitten Jack Napier into the maniacal Joker, who bills himself as "the world's first practicing homicidal artist." The script successfully blends the earliest iteration of the villain, who murdered victims with his diabolical Joker-venom, with later versions that emphasized his use of weird joke-weapons. Indeed, the fiend's much-quoted line "Where does he [Batman] get all those wonderful toys" turns the antagonists' battle into a war of escalating weaponry, with the hapless citizens of Gotham stuck in the middle.

The sex in BATMAN '89 is not nearly as transgressive as it is in Miller's graphic novel. Still, though photographer Vicki Vale (Kim Basinger) is fated to become the bone over which the two enemies fight, she does help upgrade the crusader's reputation by sleeping with his alter ego Bruce Wayne on the first date. In contrast to the comic-book character, Vicki's interest in Batman is purely professional, and only one scene-- when the Bat sweeps Vicki off to his cave-- suggests a slight "demon lover" vibe, though this potential is quickly dispelled. The Joker, of course, has no such reservations, and he continually seeks to force the lovely photographer into becoming his new main squeeze. While so doing, Joker also seeks to dominate Gotham City, not simply with the weapons of gangsters-- machine guns, fast cars-- but also with the methods of the devil he often resembles. His most memorable scheme is that of polluting Gotham's makeup-resources, forcing celebrities to "be themselves" on camera.

To be sure, one of the things least like any Batman-comic is that the script dispenses with the traditional depiction of the hero as the essence of masculine competence. Keaton's Bruce Wayne is the harbinger of many twitchy Tim Burton protagonists to come, and Wayne's devotion to his crimefighting career is something less than absolute. After one hookup with Vicki, Wayne seriously thinks about revealing his identity to her-- possibly the writers' way of keeping him sympathetic to female members of the audience. Wayne's attempt to come clean is foiled by the Joker's own attempts to romance Vicki-- surely the least well-conceived scene in the movie-- but later in the film, Alfred gets the same message across. Subsequent jokes about the faithful butler allowing the girlfriend into the Batcave don't take into account that the old fellow essentially does the same thing Wayne himself meant to do. This allows the audience to identify with the bond between Vicki and her double-identity lover, even though further sequels in the Bat-series dropped her character entirely.

For all the positioning of Joker as the funhouse-mirror version of Batman's own obsession, BATMAN '89 could have been a snooze-fest without Burton's ability to keep the film on track with regard to wild, pulpy action-scenarios tinged with morbid humor, just like his previous success BEETLEJUICE. There are various elements that a purist won't enjoy, such as casting aside Batman's swashbuckling athletics in favor of "Armored Bat-Dude," which was a major deviation from Frank Miller in particular. Still, after the success of the movie, the floodgates opened as never before, and even though a lot of the nineties films were less than impressive, at least they were deficient in the same way as any other film aimed at a general audience, rather than for having failed to appeal to juveniles alone.

Posted by Gene Phillips at 3:12 PM
Email ThisBlogThis!Share to TwitterShare to FacebookShare to Pinterest
Labels: combative adventures, the marvelous