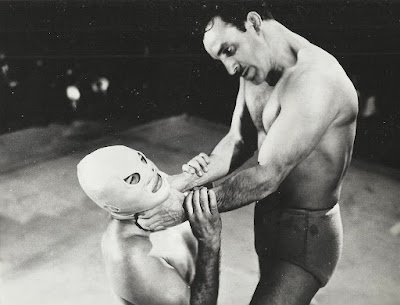 Now this is what a Luchadore film ought to be! It's not only good because it's the first full iteration of the Santo persona, but also because the film was shot at Mexican studios and given a more substantial budget. I compared the first "quasi-Santo" film, SANTO VS. THE EVIL BRAIN, to a particularly bad Monogram feature. In contrast, ZOMBIES looks like a really good B-movie from one of the major U.S. studios of the forties. In terms of convincing sets and fluid camera-work, ZOMBIES is easily the equal of the Roy William Neill "Sherlock Holmes" films.
To be sure, the plot is less akin to mystery-fiction than to the wild and wooly world of superhero serials. I would imagine that these action-heavy chapterplays enjoyed popularity in Mexico due to their emphasis on action rather than dialogue. Many tropes of the adventure-serial, such as the masked villain out to rule the world with forbidden technology, went largely dormant in U.S. movies once the serials were no longer in production. But many Mexican films kept the trope going all through the 1960s, even in such unusual vehicles as 1957's AZTEC MUMMY.
The film begins with two converging plotlines: the attack of costumed, invulnerable zombies upon a local bank, and the tearful search of Gloria Rutherford (Lorena Velasquez, who went on to make three more Santo movies) for her missing scientist-father. I don't think anyone ever finds the father, but as Gloria discusses the matter with plainclothes police, she notes that the elder Rutherford was researching the phenomenon of Haitian zombies. This sequence also introduces the missing man's brother, Tio Genaro, and his devoted servant. The two of them have absolutely nothing to do with the story except (and any viewer should see it coming) to provide the Big Reveal that Genaro is the masked mastermind behind the zombies, while the servant is his equally masked henchman. There's a tossed-off mention that Genaro was partly crippled in a mine he co-owned with his brother, but if this was meant to provide motivation for his hijacking the brother's research for evil ends, this plot-thread is left dangling. The allusion to Haitian beliefs also proves a dead-end, for the never-named mastermind uses scientific wizardry to bring dead man back as near-invulnerable zombies
Somehow Santo-- who apparently has his own Batcave-like sanctum, even though this film appeared four years prior to the popular TV show-- finds about the zombies' depredations. Most of the film follows him driving around and tussling with the zombies in some vivid fight-scenes. But because it's all so well-filmed, I didn't even care that I didn't know why the zombie-mastermind sent his slaves to abduct a bunch of young boys from what was either a school or an orphanage. The zombie-master seems to have no particular goal in mind, though toward the end he sends his servants to abduct his niece Gloria, not only to lure the cops into a trap but also to make Gloria into another zombie.
Fernando Otes, who played the primary hero in EVIL BRAIN and had Santo as his sidekick, plays one of the zombies here. Otes also co-wrote the story with two other collaborators, one of whom was director Benito Alazraki. Though Alazraki never made another luchaodore film so far as I can tell, he deserves considerable credit for helping to formulate the definitive look of the Santo series.
Posted by Gene Phillips at 2:46 PM
Email ThisBlogThis!Share to TwitterShare to FacebookShare to Pinterest
Labels: combative adventures, the marvelous