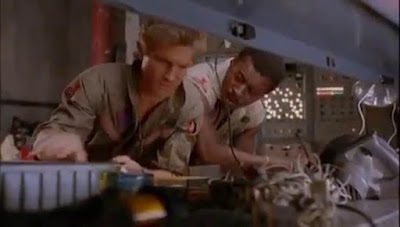 These two post-apocalyptic flicks are little more than another Roger Corman attempt to milk the shocks of the 1979 ALIEN in order to turn out yet more cheapjack thrillers.

Though in this future the bomb was banned, someone unleashed germ weapons. and most of the world's humans have been wiped out. The script does not explain the status of the remaining humans, except for the small group of survivors in a small laboratory complex out in the wilderness. It's not clear what these scientists are working on, though they've lost contact with a similar lab somewhere-- all of which begs the question as to what authority the labs answer to, given the annihilation of the world's populace.

Their location is doubly counter-intuitive in that the surrounding deserts seem filled with hideous mutants called "gargoyles." The principal characters-- principally George Kennedy, Andrew Stevens, and Starr Andreef-- manage to keep the marauders out. Then one of the scientists comes across a young human woman in the wilds and brings her into the complex. Sad to say, she's been raped by a gargoyle, and her mutant spawn comes to term in a matter of hours, growing into a man-in-a-rubber-suit monster. Most of the resulting violence, tediously directed by Thierry Notz, takes place in the complex and almost everyone wears tacky looking uniforms. 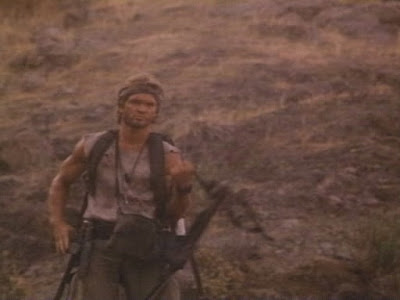 For the sequel, which feels more like a near remake, Notz was replaced as director by Stevens, who also wrote the script. Stevens may have sensed the lack of visual appeal for those tacky uniforms, for his character David Pennington goes outfitted like one of the many Mad Max imitators, and when he leaves the compound he carries a crossbow to fend off gargoyles. None of the other characters from the first film are on hand, so it's also likely that Stevens wanted to start afresh. In addition, though WITHIN II is still junk, the plot at least gives the various actors-- Clare Hoak, Barbara Alyn Woods, R. Lee Ermey and Andrew's own mom Stella Stevens-- a lot more stuff to do than just run around corridors shooting at rubber-suited monsters.

This time, the trope of monsters replacing humans is made more central. While Stevens is out of the complex foraging for materials that may help against a deadly virus, he meets a young woman, Ariel (Hoak), and they travel together while kindling a romance. Unfortunately, in this world as in most Mad Max ripoffs, there exist human enclaves with freaky customs. One such enclave has become bonded to the prowling gargoyles, and the natives of the enclave sacrifice Ariel, letting her be raped by a gargoyle. David takes her back to the complex, where she gives birth to a gargoyle. Mayhem ensues.

Though the rubber-suit follies are no better than before, Stevens as director does try to visually jazz things up, and Barbara Alyn Woods stands out as a researcher who selfishly keeps a vaccine remedy away from her allies, just to have it for her personal use. I debated as to whether or not WITHIN II qualified as a combative film, given that David does decimate five of the natives who sacrifice his girlfriend. But in the end, the climactic struggles against the monster I judge to be no more than disorganized violence.

Posted by Gene Phillips at 1:31 PM
Email ThisBlogThis!Share to TwitterShare to FacebookShare to Pinterest
Labels: the marvelous