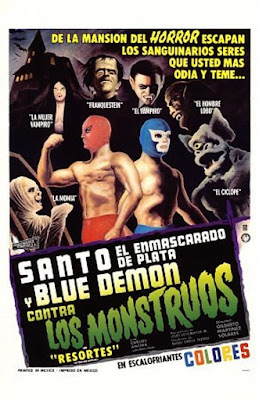 Though in the wrestling ring the titular luchadores Santo and the Blue Demon were rivals, the exigencies of the movie-business made them allies on the screen, starting with this, apparently their first "crossover" film. Both of their cinematic personas were wrestlers who went around from place to place as part-time superheroes, beating up spies, mad scientists, and of course, monsters.

The film's "monster mash" aspects, however, are less interesting than this 1970 film's resemblance to the first "quasi-Santo" film, SANTO VS. THE EVIL BRAIN. In my review I described how the wrestler known to the world as "Santo" accepted a sidekick-type role in BRAIN, during which a mad scientist brainwashed his character and even forced him to fight his crimefigting ally El Incognito.

MONSTERS actually devotes quite a bit of screen-time to the same conceit-- though the Blue Demon performer, who had been featured in his own series of stand-alone luchadore films, may not have liked being relegated to this secondary status. But even before mad scientist Doctor Halder unleashes the forms of resuscitated monsters upon the world, the evildoer catches Blue Demon spying on him. The hero is subjected to a brainwashing machine that turns him into Halder's servant. Halder also uses the machine on all the monsters to force them to do his will-- though his will doesn't seem to consist of anything but having the monsters run around attacking people. Inevitably Santo has to battle his lucha-buddy, just as the two fighters of EVIL BRAIN did, after which the two heroes are once more united in the fight against evil.

Because all of the monsters remain under the mad scientist's control, none of them have any individual characterizations, and so their battles with the wrestlers might as be conducted with a bunch of nondescript henchmen. It's of passing interest that Halder's monster-menagerie includes not only such usual suspects as a nummy, a wolfman, a tophatted vampire and a "Franquenstein Monster," but also a human-sized Cyclops. There are also a couple of female vampires running around, one of whom tries to seduce Santo, but they're excluded from the fight-scenes. Director Gilberto Solares makes vivid use of wide-angle shots to give the battles extra punch-- which is more than I can say for a similar 1973 effort, pitting the two wrestlers against low-grade versions of Dracula and the Wolf Man.

Posted by Gene Phillips at 3:34 PM
Email ThisBlogThis!Share to TwitterShare to FacebookShare to Pinterest
Labels: combative adventures, the marvelous