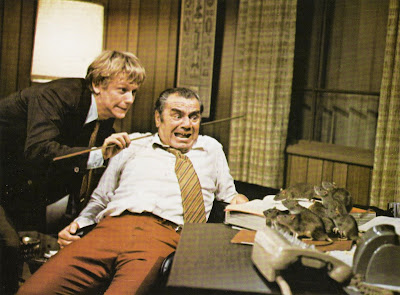 WILLARD may be seen as a bridge between the psycho-killer flicks of the sixties and the "nature gone wild" movies of the seventies. In most of the later films, like 1972's FROGS, it's the capricious critters who are the stars. But to the credit of director Daniel Mann and screenplay-author Gilbert Ralston, the character of the titular Willard carries the film. (As I remember the human viewpoint character of the sequel BEN does not far so well and is overshadowed by his rodent comrades.)

Willard Stiles (Bruce Davison) is a repressed twenty-something who works at a shipping company. At one point Willard's late father owned the company, but the father's partner Al Martin (Ernest Borgnine) has somehow taken over the company. Martin constantly finds fault with Willard, claiming that only a promise to Willard's widowed mother Henrietta binds Martin to keep the young man on. But Martin's real motive is that he feels free to push Willard around, requiring him to work nights and weekends but never giving the youth a raise in his salary. Over the course of the film it will become obvious that Martin is the sort of grifter who's not satisfied with bilking his partner of his company: he has to continue tormenting the late partner's son to make himself feel powerful. Further, the crumbling old house in which Willard and Henrietta reside becomes another target for Willard's greed.

Henrietta (Elsa Lanchester) has become something of a smother-mother by dint of her illness and her total dependence on her son. Willard lives in a bubble, defined by his work and his mother's needs. Yet the antiquated house also becomes the source of Willard's only friends: a nest of rats that take up residence there. Willard, starved for a real connection, befriends the rats and makes a home for them in the basement, all without the knowledge of his rat-hating mother.

The 1971 film develops its narrative slowly but deliberately, depending less on violence than on mounting frustration and the occasional shocks from the squirming rodents. When Willard does take action against his nasty boss, it's on the level of a prank, letting loose his ratty allies in a party hosted by Martin. However, Henrietta dies the next day, and Willard finds himself swamped in debt, not least to pay for the upkeep of the burgeoning rat colony. Not even a little romantic attention from Joan, a sweet young temporary at the shipping company, can reduce Willard's troubles.

Willard takes the next logical step: employing his rat army to help him rip off one of Martin's clients. But Willard makes the mistake of taking one of his friends to work, for Martin sees the rat and squashes it. This pushes Willard to full metal psycho, bringing about the movie's key scene, with Martin suffering the death of a thousand bites. However, Willard then tries to divest himself of his former buddies, particularly the one called Ben, who for some reason becomes the pack's new alpha-- and the biter gets bit, literally. I've not seen the 2003 remake, but it will have to go the extra mile to beat out Davison's subdued psycho-rat-wrangler.

Posted by Gene Phillips at 2:10 PM
Email ThisBlogThis!Share to TwitterShare to FacebookShare to Pinterest
Labels: astounding animals (u), perilous psychos (u), the uncanny