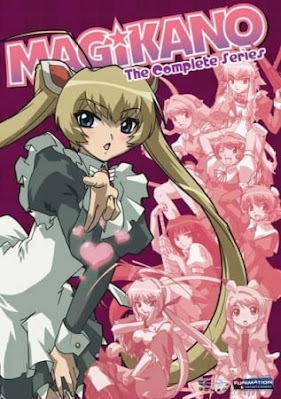 I haven't read the original manga of MAGIKANO, but I've no reason to believe that it holds any deeper currents than the 13-episode anime series. The latter is without doubt a fairly typical "harem comedy," in which a bunch of girls compete for the attentions of a particular, often oblivious male character. Because the anime is so short, there's no resolution to any of the romance-arcs, and so at the conclusion everything ends up at the same status quo as seen at the opening.

One of the main tropes here is that of "supernatural beings trying to remain incognito in the modern world." Of the four children of the Yoshiwara family-- whose parents are conveniently "away" for the whole series-- the oldest, Haruo, is a male high-schooler, while his the three sisters are respectively two teens (Maika and Chiaki) and a young pre-teen, Fuyuno. (All four are named after the Japanese words for the seasons, though this datum has no particular symbolic resonance.) Haruo is blissfully unaware that all three of his sisters are witches possessed of great powers. Nothing much is said about how they got that way-- no allusions to parental inheritance--- though the girls have occasional contacts with some vague "witch's council" along the lines of the BEWITCHED teleseries. Haruo also possesses great potential magical powers-- toward the end of the series it's belatedly revealed that he's the reincarnation of a demon lord-- but his sisters, who assume a quasi-maternal role in his life, have chosen to keep him from becoming aware of their common heritage, or even the reality of magic in his world. Any time Haruo witnesses anything witchy, one or more of the sisters clobber him with "memory erasing hammers," after which he forgets what he saw as well as the hammering experience.

The young women seem content to keep their beloved "big brother" in complete ignorance, which may also ensure that he remains tied to their apron strings. Oldest girl Maika has somewhat stronger feelings for her "onee-san," though her "forbidden love" is played entirely for laughs. Then an unrelated witch intrudes upon their domestic bliss, citing the authority of the Witches Council to become the maid for the Yoshiwara household. This young witch, Ayumi by name, has the ulterior motive of seeking to sleep with Haruo so that she can end a magical curse on her fortunes. There may be more background to this curse in the manga, but in the series it's just an excuse for Ayumi to attempt Haruo's seduction and to butt heads with the sisters, particularly with the overly covetous Maika. To make it worse for the sisters, three other pretty witch-girls start setting their caps for Haruo as well. Through it all Haruo remains unwitting of both the seduction attempts and the magical battles, largely because he's fairly dim even without the application of  the memory-hammers.

Though a number of the episodes are just studies in sexual frustration, the series does boast a substantial number of combative magic-battles, not only between Ayumi and the sisters but also with the four of them allied against such menaces as a ghost-girl, a robotic maid-servant, and Ayumi's power-crazed witch-sister. Chiaki and Fuyuno more or less end up accepting Ayumi's presence in the house even though she never succeeds in seducing Haruo, and while Maika and Ayumi remain intense enemies throughout, there's a sense that the four of them "bond" over their common desire to protect the helpless male. Indeed, I consider Ayumi and the three sisters to be the centric presences of the story, while Haruo seems as much a supporting character as the other girls competing for his affections.

All of the sexy fanservice, with or without incest-motifs, is pedestrian, but the general sense of the absurd rescues even the weaker episodes. The creative animation of the magical battles is the standout aspect of MAGIKANO.

Posted by Gene Phillips at 2:38 PM
Email ThisBlogThis!Share to TwitterShare to FacebookShare to Pinterest
Labels: combative comedies, the marvelous