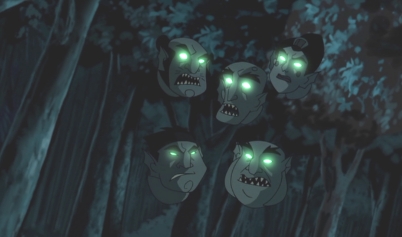 STORM OF SWORDS is one of two DTV animated films released following the success of the 2004 live-action HELLBOY film. Like that film, these follow closely the template of the original comic. Hellboy, a red-skinned, horned demon with a mysterious oversized hand, became a hero thanks to having been raised as a human being. Because of his lineage, the gruff-talking demon becomes an investigator into paranormal activity, of which there's never a shortage in his world. He's joined in many adventures by pyrokinetic mutant Liz Sherman and water-breather Abe Sapien, and in STORM two of the three characters, Hellboy and Liz, are voiced by the same actors who portrayed their live-action counterparts: respectively Ron Perlman and Selma Blair.

STORM opens with a standard "heroes get in trouble sussing out ancient tomb" scenario, one having little or nothing to do with the main story. The real story involves Japanese storm-demons known as Thunder and Lightning, who have been waiting in limbo for a chance to invade the domain of humankind. The demons guide a Japanese scholar to locate the mystical sword that sealed them into limbo, but Hellboy makes the scene with a couple of fellow investigators before the demons can fully work their will. The big red guy gets hold of the sword, which instantly transports him back to a feudal Japan inhabited almost exclusively by various types of yokai. Wikipedia claims that this is an "alternate version" of Japan, but I didn't see why it couldn't have been the real thing, even though the hero doesn't meet anyone but supernatural creatures like spider-women and floating disembodied heads.

Meanwhile, back in the 20th century, Liz and Abe do their best to help their comrade get back to his own time, as well as quelling the demons' next attempt to break free.

There's a complicated backstory about how a samurai used the sword to banish the demons in order to save his lord's daughter from the creatures. Though the ghosts of these mortals play a part in the overall narrative, they aren't vital to the story, though the backstory does illustrate some of the more counter-intuitive aspects of the medieval Japanese code of honor.

Eventually, the two parallel plotlines converge to bring about the demons' defeat and Hellboy's return to his own era. This means that everything in between the beginning and ending proves very episodic in nature. I certainly enjoyed Hellboy's jousts with the various Japanese critters, and there's a good line in which Abe saves Liz from drowning with his uuique physiology, prompting her response, "You mean I was breathing your burps?" But no viewer will exhaust himself trying to follow the extremely diagrammatic plot. My largest complaint is that the story builds up Thunder and Lightning to be the baddest of the Big Bads in Japanese mythology, and their climactic attack is rather underwhelming.

Posted by Gene Phillips at 1:27 PM
Email ThisBlogThis!Share to TwitterShare to FacebookShare to Pinterest
Labels: combative adventures, the marvelous