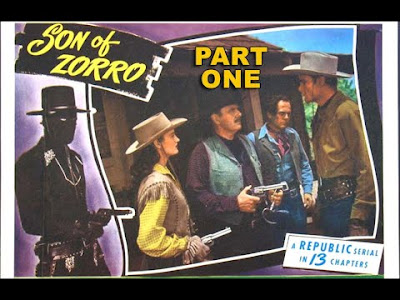 Of the four Republic serials made with the character of Zorro, SON OF ZORRO was the third in line. The first two appeared prior to America's involvement in WWII, while this one and GHOST OF ZORRO only showed up in the postwar years. Almost all of them take place in modern times rather than in Spanish California, as did the original novel and the silent film adaptation MARK OF ZORRO.

In essence, SON is a very basic, albeit well-engineered, take on the familiar B-western trope of "cowboy hero rides into town and saves everyone from evil bankers and businessmen trying to bilk the townfolk." It's set slightly after the end of the Civil War, which is important only because hero Jeff Stewart (whose name sounds a bit like that of Confederate officer "J.E.B. Stuart") returns to his ancestral ranch after serving "the call of his colors"-- by which the writers mean a flag, of course.

In Jeff's absence, evil slickers have taken over much of the town and the surrounding ranches, bleeding the people dry with taxes and fees while simultaneously giving shelter to an outlaw-gang. A local judge with the fitting name of "Hyde" seems to be in command of both the outlaws and the crooked lawmen, though in the course of the serial another individual will be revealed to be the "secret mastermind" behind all the crimes.

Jeff (George Turner) naturally objects to all of the crooked goings-on. He makes a couple of allies-- his ranch-hand Pancho and the local postmistress Kate (Peggy Stewart)-- but his greatest asset is that just happens to have had the famous Zorro as an ancestor. The career of the earlier Zorro is not explored, it's just an excuse for the existence of the original hero's costume hanging around Jeff's ranch. Jeff starts out claiming that he doesn't believe in vigilante action. But before the first episode is done, he's donned the mask of Zorro to battle the evildoers. At first Pancho is the only one who knows of Jeff's double identity, but at some early point he reveals it to Kate as well, though it must have gone past me in the blink of an eye, since it doesn't get much narrative emphasis.

Since lead actor Turner had been a boxer before becoming an actor, he acquits himself well in the lively Republic fight-scenes. Since the villains are entirely mundane, the cliffhangers often involve the bad guys trying to blow someone up with dynamite. The most interesting trap is an accidental one, when Kate gets knocked unconscious and falls into the path of an ordinary mill-wheel.

Western serials are generally a little better than B-western features as far as giving the womenfolk some heroic action, but SON OF ZORRO doesn't allow Kate much agency. In the first segment she draws a gun to protect Jeff while he fistfights a thug, and in one cliffhanger she saves herself by jumping from a driverless stagecoach. But despite the moxie Stewart brings to her simple character, she's just another damsel in distress. I was familiar with many of the supporting actors, but not with Ernie Adams, and I was pleased by the way he played Judge Hyde with welcome touches of oiliness and bad temper. In essence, SON is just a B-western with decent production values and cliffhangers tossed in, and adds nothing at all to the mythos of the original Zorro.

Posted by Gene Phillips at 12:57 PM
Email ThisBlogThis!Share to TwitterShare to FacebookShare to Pinterest
Labels: combative adventures, outre outfits (u), the uncanny