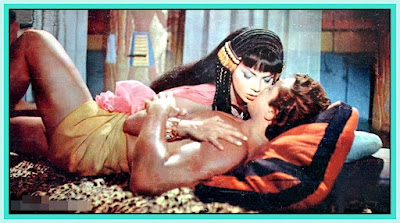 Maciste gets one of his chronologically earliest outings when he shows up (according to the dubbed voiceover) in Egypt in the eleventh century B.C., which is more or less the time-period during which the Biblical Samson lived. As in many such films, Maciste (Mark Forest) doesn’t actually know who he is or where he came from. But because he’s been adopted by a tribe of impoverished Egyptians, who are apparently conversant with the Hebrew story of Samson, he’s dubbed “the son of Samson.” I would imagine that the original Italian script did not involve the Samson reference at all, given that the simple plot makes no reference to Hebrews of any time period. The opposition between “good tribe” and “bad tribe,” so indispensable in most peplum-films, consists of native Egyptians being oppressed by Persian invaders and their Egyptian servitors.

The Persians’ chief representative is Queen Smedes (Chelo Alonso), the wife of the rightful Pharaoh. A voiceover asserts that her loyalty to the Persians is supposed to be a secret, but it’s hard to see how she could conceal her loyalty to the occupying forces, particularly after she has the old Pharaoh assassinated. She has a potential opponent in the Pharaoh’s handsome young son Kenamon, who hobnobs with the lower classes and even has a love connection with a poor girl. So Smedes uses drugs and an amulet-- possibly magical, or maybe a hypnotic aid--to brainwash Kenamon so that he marries his father’s former wife, ensuring that Smedes remains on the Egyptian throne.

Maciste naturally comes to the defense to the tormented lower classes, not least because Maciste like Kenamon has a girlfriend among their ranks. He plans to arrange a rebellion against the evil queen, but he catches Smedes’s eye when performing in the local arena (suggesting that the 11th-century Egyptians had their own version of the Roman “bread and circuses.”) Smedes brings Maciste into her palace, and from their G-rated lovemaking, it becomes increasingly ambivalent as to whether she’s subverting his will with drugs and if he’s just playing her to suss out the easiest way to overthrow her reign. Smedes is too smart for Maciste, slipping the hero a knockout drink him and having him flung to the crocodiles. However, Maciste is too tough for the crocs and ends up leading the good Egyptians against the bad collaborators and the Persian occupation—which is naturally all wrapped up in one big climactic battle.

This is a fairly ordinary muscleman-flick, without any outstanding stunts or fight-scenes. Chelo Alonso provides the strongest element in the film, particularly when she does a sexy dance to captivate the hero. Maciste and Kenamon are loose mirror-images, given that regal “bad girl” Smedes threatens both of their relationships with noble but poor “good girls,” even though the evil queen is interested only in Maciste and never makes any moves on her stepson/husband. Yet it’s Kenamon who gets his girl in the end, while out of the blue Maciste suddenly decides that he’s got to desert his lady love in order to go questing to help more people in trouble. Given that none of the Maciste films connect with one another, there should be no objection to the hero settling down with a wife in one era, given that he’s destined to pop up in some other timeframe. But maybe the scripter just thought the audience would like to see their immortal hero toss off the chains of matrimony in favor of having yet more never-ending adventures.

Posted by Gene Phillips at 12:00 PM
Email ThisBlogThis!Share to TwitterShare to FacebookShare to Pinterest
Labels: combative adventures, enthralling hypnotism and illusionism (u), superlative skills (u), the uncanny