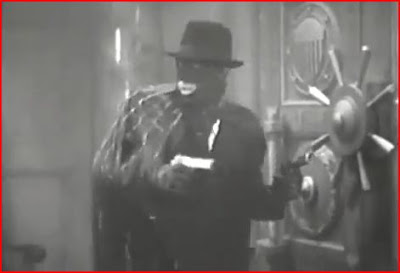 THE SPIDER'S WEB is one of two serials adapting the adventures of the Spider, one of the more popular heroes of the pulp magazines. It's ironic that although in these two serials the extravagant violence of the prose character was dampened, both movies capture the appeal of the hero better than the sole serial appearance of the more famous Shadow, to say nothing of a handful of cheapjack B-films starring the Master of Darkness. The Spider, though given a markedly different costume design from the one he wore in the pulps, even LOOKS better than the Shadow of the serials.

Some serials start off with showing the hero donning his double-identity for the first time to take on a menace, and then giving up the game once he's quelled that initial threat. WEB, however, establishes that amateur criminologist Richard Wentworth (Warren Hull) has been fighting crime as the masked Spider for some time, and that only at the serial's inception do he and his fiancee Nita Van Sloan (Iris Meredith) contemplate giving up the superhero game in order to pursue domestic bliss. Obviously the audience knows that the hero will put off his retirement once the new criminal in town starts his bid for power. But even though Richard and Nita aren't constantly moaning about their delayed nuptials, the opening sets up some suspense about whether or not they'll even get the chance to retire.

Sure enough, a masked mastermind, the Octopus, begins a campaign to dominate America by exerting control over all of the country's major lines of transportation. Unlike other such world-beaters, the evildoer depends largely on a small army of hired thugs and various uncanny trick-weapons. Only late in the serial does he unveil a special ray with which he can disable planes in flight, which is the only marvelous element in the story, but the weapon then disappears from the narrative, in contrast to the way most fiends depend on one big super-weapon, like the death-ray in the previous year's BLAKE OF SCOTLAND YARD.

That said, a lot of serials become tedious when they fixate on one world-beating device, and WEB never becomes dull. The early episodes, while not as violent as the pulps, show the two-gun hero mowing down a fair number of gunmen in self-defense, in contrast to the many serials in which heroes and villains shoot at one another and constantly miss. The Octopus is a pretty immobile villain-- he holds court in his sanctuary, garbed in white robes and appearing to be crippled-- but the number of country-conquering plots he unleashes makes him seem particularly formidable. Adding to the mayhem are the Spider's fighting aides Ram Singh and Jackson, not to mention the cops, who are sometimes in the position of trying to arrest their costumed benefactor as well as the thugs. Even Nita shows that she can handle a pistol, as well as escaping captivity by placing a female crook in an armlock.

Some fans have theorized that this trope of the hero on the outs with the law contributed in no small way to the evolution of Marvel Comics' Spider-Man. Apart from the serial's influence on pop culture, it also boasts a lot of heady, off-the-wall fight-scenes that have a wilder, woolier feel than many of the more mechanical Republic serial-spectacles. Hull and Meredith don't have many romantic scenes, but they generate good chemistry, and in place of a stultifying "comedy relief" we have the turbaned Ram Singh-- who is presumably a Sikh as in the magazine-- swearing all sorts of colorful oaths. James W. Horne, co-directing WEB with Ray Taylor, may be responsible for injecting a number of humorous asides into the mouths of the thugs, but if so, he and the writers don't do it so often that it distracts from the action.

While the producers couldn't have known that this serial was going to prove successful enough to generate a second outing, they left the door open at the conclusion, for despite Nita's protests Richard Wentworth avers that the Spider will strike again-- which he did.

Posted by Gene Phillips at 1:19 PM
Email ThisBlogThis!Share to TwitterShare to FacebookShare to Pinterest
Labels: combative adventures, the marvelous