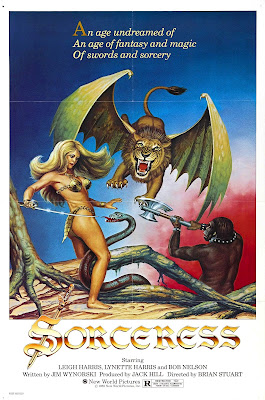 The above lobby card is probably more amusing than the movie itself. There is a winged lion in the movie-- albeit one that looks like a demented Muppet-- but there's no black guy with an axe, and there's no single heroine, as the title loosely suggests, but rather twin heroes, mediocre as they may be.

SORCERESS was one of the first films that sough to coast on the success of CONAN THE BARBARIAN. Unfortunately, it was also one of the many Roger Corman-produced flicks in which Corman decided to cheap out big-time. Veteran exploitation director Jack Hill, who claimed to have co-written the movie with Jim Wynorski, hoped that he might spark his flagging career with this film, but instead it became his final directorial credit.

I tend to believe Hill co-wrote the film, even though its plot is a garbled mess. There are glimpses of anarchic humor here that recall Hill's inspired work on films like THE BIG DOLL HOUSE. But even though I'm sure Corman was responsible for a lot of the flaws of SORCERESS by cheaping out on the budget, the plot is flimsy in the extreme and suggests that Hill was just winging it-- which is never a good way to make a comeback.

The villain's bid for power defines the course of the plot. Evil sorcerer Traigon (Roberto Ballesteros) plans to sacrifice his own firstborn to his evil goddess Caligara (a reference to Doctor Caligari, perhaps?) His unnamed wife, having just given birth, flees with her progeny, but Traigon and his thugs overtake her. Though the mother is wounded unto death, she has a surprise for her nasty husband: she gave birth to twins, and she refuses to tell Traigon which one is the eldest. In addition, the wife-- possibly a priestess of some sort?-- summons an ancient mystic warrior, Krona, who fights off Traigon's warriors while the wife herself kills Traigon. However, Traigon will be able to return from death in 20 years-- just enough time for his two offspring to grow to maturity-- and so the dying wife enjoins Krona to have the twins raised in hiding. Krona does so, swearing to endow the twins with special fighting-powers, even though they're twin girls. This setup has some decent melodramatic potential, but Hill blows it with a careless attitude toward establishing characters.

Twenty years later, twins Mara and Mira (twins Leigh and Lynette Harris) have been raised on a small farm by adoptive parents. The parents tell the twins none of their backstory, nor do they actually inform them that they are not boys. The girls apparently are too dumb to have made any conclusions themselves from looking at their adoptive parents, much less from the behavior of the farm's animals. They're first seen skinny dipping and being watched by a satyr named Pando (who seems intelligent even though he never utters anything but goatlike bleats). The girls catch Pando perving on them and beat him up.

Being off the beaten track is absolutely no help to the girls, for as soon as Traigon is reborn, he easily tracks his daughters down and slaughters everyone on the farm except the twins. The bereaved ladies make it into the nearest town, where they gain allies: a blustery Viking named Valtar, a roguish prince named Erlick, and Pando, who somehow gets involved for no good reason. After some more gratuitous fight-scenes, Traigon manages to lure the girls away from their protectors, and soon dispenses with the whole "who's the firstborn" plot-thread with some magical contrivance. The supporting heroes try to rescue the girls, but Traigon manages to keep hold of Mara, the elder sister, so the rest of the film is all about rescuing her before her mean father can sacrifice her.

Reputedly the shoot was a jinxed one, so that may explain why even Hill's specialty, that of extravagant violence, didn't come off. The Harris twins come off as blank slates even when they're undergoing orgasmic titillation in tandem (did I forget that they're "Corsican twins" who can experience one another's impressions?) Mara and Mira are the stars of the show, but almost everything in the script places more emphasis on the supporting characters. It's not the worst sword-and-sorcery film ever made, but SORCERESS will leave even the most undemanding viewers un-enchanted.

Posted by Gene Phillips at 2:20 PM
Email ThisBlogThis!Share to TwitterShare to FacebookShare to Pinterest
Labels: combative adventures, the marvelous