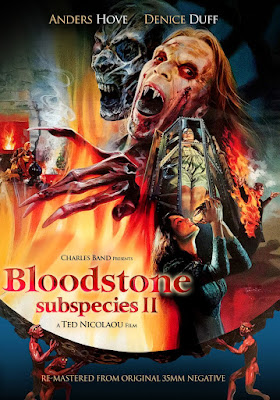 In my review of the first film in the series, I gave away one of the spoilers to the first sequel: that Stephan, Radu's only real competition for the position of SUBSPECIES' main character, gets knocked off. Indeed, as soon as Radu (Anders Hove) is revived, perhaps mere minutes from the conclusion of the first movie, writer-director Ted Nicolaou is quick to have the evil vamp murder his half-brother, who unlike Radu never manages to resuscitate himself. However, through a contrivance Stephan's newly-vampirized lover Michelle not escapes Radu but takes with her the mystic blood-bestowing Bloodstone. The stone once again plays the part of the bone over which good and bad vamps fight, but given how obsessive Radu becomes over bringing Michelle back to him, the "bone" might have dispensed with.

Michelle (now played by a new actress, Denice Duff) flees to Bucharest and tries to contact her sister Rebecca (Melanie Shatner), who just happens to have come to Romania looking for Michelle. Indeed, the narrative shifts somewhat away from Michelle's endeavors to survive as a newbie bloodsucker and toward Rebecca's quest to find her sibling-- not least because in her search Rebecca picks up three other support-characters to help her.

Nothing daunted, Radu summons up his own helper: his sorceress-mother, known only as "Mummy," who was responsible for passing the vampire curse on to the royal family that bred both Radu and the late Stephan. The old witch, looking even more haggard and raddled than Radu, immediately lends her skills to the pursuit of Michelle. The scenes between Radu and Mummy, though not particularly revealing of their backstory, at time project some of the same evil-mother-and-son vibe I got from the interactions of Grendel and his nameless mother in the epic poem BEOWULF.

The middle of the film is just a lot of running around to delay the climax, though some of the complications are enlivened by the character of police detective Marin (Ion Hadic), who being a younger Romanian remains staunchly skeptical about vampires. Eventually evil son and evil mother capture Michelle and Rebecca, and Radu tries to make Michelle kill her sister to prove her vampiric loyalty. However, Radu finds that even with newbie vamps, one should never take a woman for granted, and so Michelle turns the tables on both Radu and Mummy. However, though Rebecca takes her leave while Michelle seeks refuge from the sun, the film ends with a cliffhanger heralding the appearance of a second sequel. 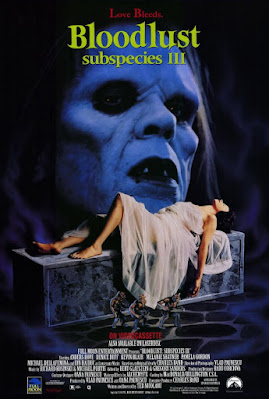 At the conclusion of BLOODSTONE, Mummy survives being set on fire, captures Michelle and revives the apparently slain Radu once more. The story-arc of BLOODLUST proves a little more interesting than Part Two, for now Michelle has almost become worn down by Radu's pursuit. She pledges him her allegiance if she will teach him everything she needs to know about living as a vampire. Radu for his part begins to show a softer side, for now he wants his half-brother's former flame to yield him not only loyalty but also love.

Once Michelle goes missing again, Rebecca again saddles up for another sister-hunt, and brings along both Detective Marin and another of the support-characters, who just happens to be a handsome young guy who falls for Rebecca's charms.

Speaking of charms, whether or not Michelle ever sincerely considered yielding to Stephan's killer, she finally breaks off her lessons and expresses her disgust for his Nosferatu-ugliness. The lovesick Radu carries Michelle back to the family crypt, and Mummy, annoyed by the new girl's disloyalty, tries to kill Michelle, only to be slain by Radu. (She stays dead, not making an appearance in the fourth and last film in the series, BTW.) Once more Rebecca seeks out the hiding place of Radu, bringing along a gun full of silver bullets. Michelle shoots Radu, but this only delays him. The generally useless Bloodstone crops up at the climax, as Radu tries once more to get it back-- a substitute for Michelle's unobtainable love, perhaps?-- but he only gets killed again, though in a more spectacular manner than he did in BLOODSTONE. But he would arise for one last time in the series' final (for the time being) entry.

Posted by Gene Phillips at 1:39 PM
Email ThisBlogThis!Share to TwitterShare to FacebookShare to Pinterest
Labels: the marvelous