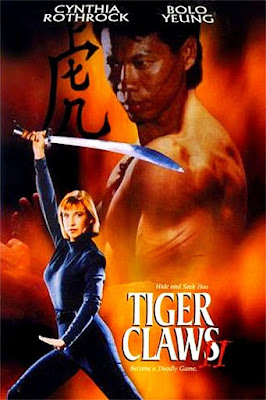 On some occasions, the ascent of a screenwriter to the position of director heralds the dawning of a strong new talent. Of course, within the sphere of American chopsockies, no one expects the advent of a Billy Wilder, or whatever Wilder would have been in some alternate universe where he wrote chopsockies.
All that said, J. Stephen Maunder, the writer of the passable time-killer TIGER CLAWS, displayed the Peter Principle at work when he assumed both writing and directing duties on the second and third entries in this series-- though it's hard to call it that, given that Number Two appeared five years after the first one, while Number Three waited a good three-four years following Number Two.
Both films are thinly plotted excuses for a lot of kung-fu combat scenes with some vague supernatural goal in mind. Jalah Merhi and Cynthia Rothrock again play two karate cops, Tarek and Linda, who get mixed up in fighting martial arts menaces, but in neither film does Rothrock get a chance to shine, despite being top-billed over Merhi. The latter is a mediocre performer whose main attraction was being in control of the production company.
They're both tedious, but I suppose Number Two is worse than Three, simply because the plot makes less sense. There's a Big Bad who wants to open a time-gateway to the days of Imperial China, which gateway has supposedly been a thing that ancient kung-fu masters could access at certain times, in order to send promising young students back for-- their elders' approbation? It's never clear what the villain gets out of opening the time-portal, but he springs from jail the villain of the first film, the Death Dealer (Bolo  Yeung, still barely able to speak English) to help him with this project. The villain stages a lot of tournament matches-- I think to amass supernatural power in order to open the gateway-- and the two cops get involved and kick a lot of butt.
Number Three at least wears its influences clearly on its sleeve: it's essentially SUPERMAN II in kung-fu garb, right down to the way three ancient Chinese evildoers-- two male, one female-- are garbed in filmy black costumes. A villain (Loren Avedon, who's at least a little bit funny now and then) releases the three villains from imprisonment and tries to use them to form a new crime syndicate. Linda appears very little after she's killed early on, which unfortunately means lots more Merhi. However, the "all a dream" conclusion, in which Linda is alive and the whole invasion never happened, is mildly diverting-- on top of which, Maunder even throws in another touch suggesting that the invasion is still going to happen even though Tarek only dreamed it.
Still, pretty dire all around.
Posted by Gene Phillips at 3:48 PM
Email ThisBlogThis!Share to TwitterShare to FacebookShare to Pinterest
Labels: combative adventures, the marvelous