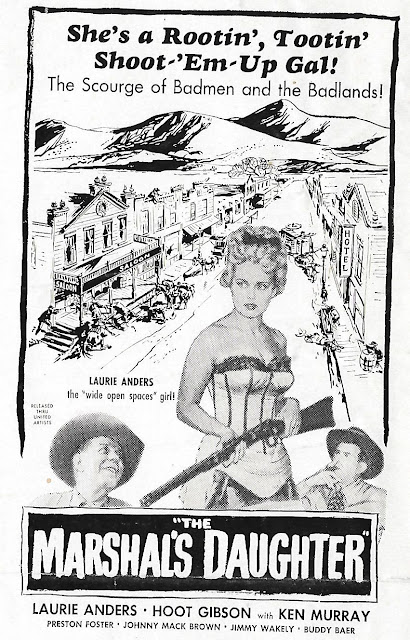 THE MARSHAL'S DAUGHTER is one of the many extremely cheap  western features that came out in the early fifties, a little before television began to edge the cheaper flicks out of the arena. Purportedly the movie's star Laurie Anders was the protege of producer Ken Murray, and he was attempting to see if he could launch a series of movies with Anders as a double-identity crimefighter. As "El Coyote," Anders' character Laurie Dawson dons a face mask and heavy garb that disguises her femininity, much as Linda Stirling had in the serial ZORRO'S BLACK WHIP about a decade earlier. However, it would appear that DAUGHTER did not rate even one sequel, and Anders did not make more than a few more acting appearances.

I've seen comments to the effect that DAUGHTER wasn't as good as the average grade-C oater, but as I'm no fan of that subcategory, I think this was a modest success in terms of showing how a female hero might take up crimefighting during the Old West. Laurie is the only child of Marshal Dawson (silent film-cowboy Hoot Gibson), but though she appears to be a woman of her time, she's been raised to be "the son her father never had," being adept with both riding and shooting. She also has an advanced knowledge of jui-jitsu and even demonstrates it on her hapless boyfriend. Possibly this element was meant to suggest that the action took place in the 20th century, but if so I don't remember seeing any other prominent indicators of modernity.

Though there are no actual Mexican characters in the story, Laurie apparently tries to pass herself off as a Mexican man-- addressing her opponents only in Spanish, for example-- because it's assumed that many such males are on the short side. (One bandit, prior to getting clocked by Laurie's judo, calls El Coyote a "runt.") In a couple of scenes, Laurie more or less signals her use of Mexican motifs by doing a ventriloquist act with a puppet speaking in Mexican dialect. This of course is as far as the film is willing to go in suggesting the perils of a double identity.

Action and dialogue are fair, but the film's main significance is its attempt to promote a female action-hero-- oddly, about a year before a TV show succeeded with the 1954-57 ANNIE OAKLEY series.

Posted by Gene Phillips at 3:48 PM
Email ThisBlogThis!Share to TwitterShare to FacebookShare to Pinterest
Labels: combative adventures, outre outfits (u), the uncanny